One of the big parts of my week’s food prep – I’ll get to the rest later this week as I eat most of it – was making granola. I truly hate the cost of granola in the store. On top of that, I cannot control what is in it so why not make it myself. I did a post back in 2008 on granola and recipes my mom gave me. The original recipe is here. 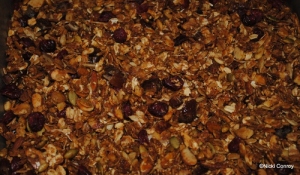 Here is the recipe that I made on President’s Day for the week.

In a large bowl, combine all dry ingredients except cinnamon, dried cranberries and dates.  Combine honey and oil.  Stir into oat mixture.  Spread out in a 13”x9”x3” pan.  Bake in a 300F oven until light golden brown – 45 to 50 minutes – stirring every 15 minutes. After 15 minutes, stir and sprinkle cinnamon over mixture. Stir again. Remove from oven.  Stir in dried apricots and raisins.  Remove to another pan to cool.(Ooops, forgot to this. It is a really vital step as my granola stuck to the original pan as it cooled.)  Stir occasionally during cooling to prevent lumping.  Store in a tightly covered jar or plastic bags.  Makes 6 ½ cups.