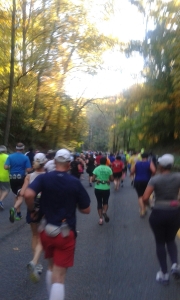 I haven’t stopped running. I’ve just gotten sidetracked. And, there may be mention of female issues in the writing below so read on at your own risk.

I had some health issues in January that caused me to not run for a period of time. Hopefully, this particular issue will never surface again. I seriously hate menopause. Although, as my doctor is quick to point out, a woman is not said to have gone through menopause until she has not had a period for a full year. So I hate that before menopause time.

February must have brought about a better time as I managed my highest monthly total year-to-date in that short month. I ran 41 miles. I do have to admit I am not looking closely at my log, just monthly totals. Some of those miles could be walking or hiking. Still that is 41 miles of movement.

Then came March, April, May and June. Remember I moved – basically twice since I moved all my stuff into a storage unit for three weeks – in those months. I also had two children visit. One of those visits was quick – a couple hours on the way from Nashville to Charlotte. The other was a five day visit with the normal touristy breaks as we could due to the rain. In March and May I hit seven miles each month. In April, ten; June, 14.

The problems with all of this are plentiful. While my bad cholesterol is going down, my doctor suggested the start of a statin. My one son seems to think the world is on statins. I prided myself that my running kept me off drugs. I have also gained weight, weight I don’t want and am now stuck trying to get off. As any post 40 year old knows, weight does not come off easily once you turn 40.

So I’m back at it. I have started running again this week. I’m cat sitting in Maggie Valley so it has given me some new roads to run on. I like this as I have basically been running the Lake since I moved here. I’m going to keep going but today will have to pass as I have a Bible class at 6 pm and, while I could run there and home – approximately 2.2 miles round trip – the weather, okay just the sky, looks iffy.

Written on a Thursday evening for publication the following morning.