Lost at Windy Corner: Lessons From Denali On Goals and Risks

Windy Corner on Denali has claimed lives, fingers, and toes. What would make someone brave lethal weather, crevasses, and slick ice to attempt to summit North America’s highest mountain? Denali has claimed over one hundred lives. It seems like the place for risky adrenaline seekers.

In this book, the author shares the lessons Denali teaches on managing goals and risks. Everyone takes chances at some time in their lives, even if it’s driving down the highway. Becoming a risk manager rather than a risk taker is what will keep you alive during difficult times.

Experience the cold, solitude, and uncertainty of life on high mountains. Apply the message, build resilience, and overcome adversities in your life.

“Amazing read. Simply stunning detail of reaching for an almost unattainable goal and achieving success against the odds“ – Amazon Reviewer

Looking down from 9,000 ft on the Kahiltna glacier on Denali.

Antarctic Tears: Determination, adversity, and the pursuit of a dream at the bottom of the world

Emotions run high in this true polar adventure. It’s a story of triumph, harrowing danger, and outright adventure. In 2012, Aaron Linsdau left his entire life behind.
Gone was the engineering career. He told his family and girlfriend that he wanted to pursue a dream to do something no other American had ever accomplished. He wanted to be the first to ski from the coast of Antarctica to the South Pole and back without aid or support. Alone.The journey to the South Pole covers over 700 miles through the most forbidding frozen terrain on the planet. The temperature is always below zero and gale force winds routinely roar across the ice. The polar plateau is devoid of life. There are no plants, animals, or insects. Antarctica provides no shelter, no protection, and is unforgiving of any mistake.But before the expedition was to start, there was much to do. Linsdau trekked 100 miles across the Greenland tundra. He skied across Yellowstone in the winter, camping in -45 degree temperatures. Towing tires up mountains and eating 4000 calories a day was preparation for Antarctica.Previous expeditions have lost tents, helplessly watching them blow over the horizon. Many explorers have quit or been rescued. What began as a brave adventure into the unknown turned into a battle for survival.Linsdau takes the reader to Antarctica. They experience incredible storms, skiing blind through whiteouts, crossing invisible crevasses, and skirting disaster. The book shows what happened every day of the expedition.The air is cold enough to freeze water in seconds and cause frostbite in minutes. Only outer space is less hospitable. Driven by passion, he sacrifices nearly everything to make his dream come true. This is a story about personal discovery, testing the limits of human endurance, total dedication to achieving a goal, and never giving up even when both body and equipment fail.


Antarctic Tears is also available as an audiobook in a 9CD box set or as MP3 files on a USB thumb drive.

“I can’t believe you did this. What a great read.” – The Navy SEALS in the audience were seriously impressed.” – Jason M., Navy Special Forces

“I finished your book and it was a great read. I still cannot fathom someone subjecting himself to that kind of environment. -Pulling all of your own supplies, and doing it solo for several months is incredible. I’ve read a lot of human endurance books, but your trip ranks right up there in difficulty.”   – Ed Lavino, Jackson, WY, author of Prevailing Westerlies

International speaker Aaron Linsdau is the second American to have skied solo from the coast of Antarctica to the South Pole, setting the world record for surviving the longest solo expedition to the pole. He is an Eagle Scout, is a National Eagle Scout Association Outstanding Eagle Scout, holds a bachelor’s degree in electrical engineering and a master’s degree in computational science. Aaron wrote Antarctic Tears and the Total Eclipse Guide series. This set of books focuses on the August 21, 2017 total eclipse across America. Each book is specific to a state or location.Aaron is an international motivational speaker, polar explorer, the author of Antarctic Tears and an award-winning photographer. Book Aaron for your next speaking engagement or keynote address HERE.  He speaks about grit, courage, attitude, perseverance, and resilience. 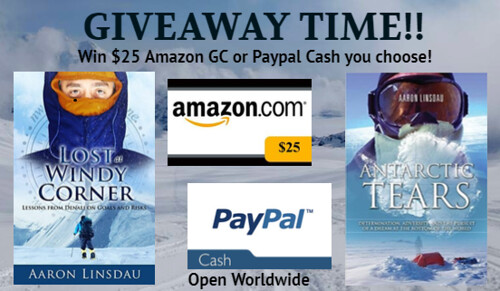 One thought on “Lost at Windy Corner – A New Release”