NEW RELEASE……..
Sweet with Heat: Seaside Summers features a group of fun, flirty, and emotional friends who gather each summer at their Cape Cod cottages. They’re sassy, flawed, and so easy to relate to, you’ll be begging to enter their circle of friends! All books can be read as stand-alone novels.Sunsets at Seaside by Addison Cole is the sweet edition of New York Times bestselling author Melissa Foster’s steamy romance novel Seaside Sunsets. The stories and characters remain the same and convey all of the passion you expect between two people in love, without any explicit scenes or harsh language.

In SUNSETS at SEASIDE…
Jessica Ayers has lived a sheltered life with little more than cello lessons and practices taking up her day. Now a member of the Boston Symphony Orchestra, she escapes the prim and proper symphony to vacation in the Seaside community in Wellfleet, Massachusetts, to determine if she is living life to the fullest or missing it altogether.

For the first time since developing the second largest search engine in the world, billionaire Jamie Reed is taking the summer off. He plans to work from the Cape and spend time with his elderly grandmother—and falling in love is not in his plans. 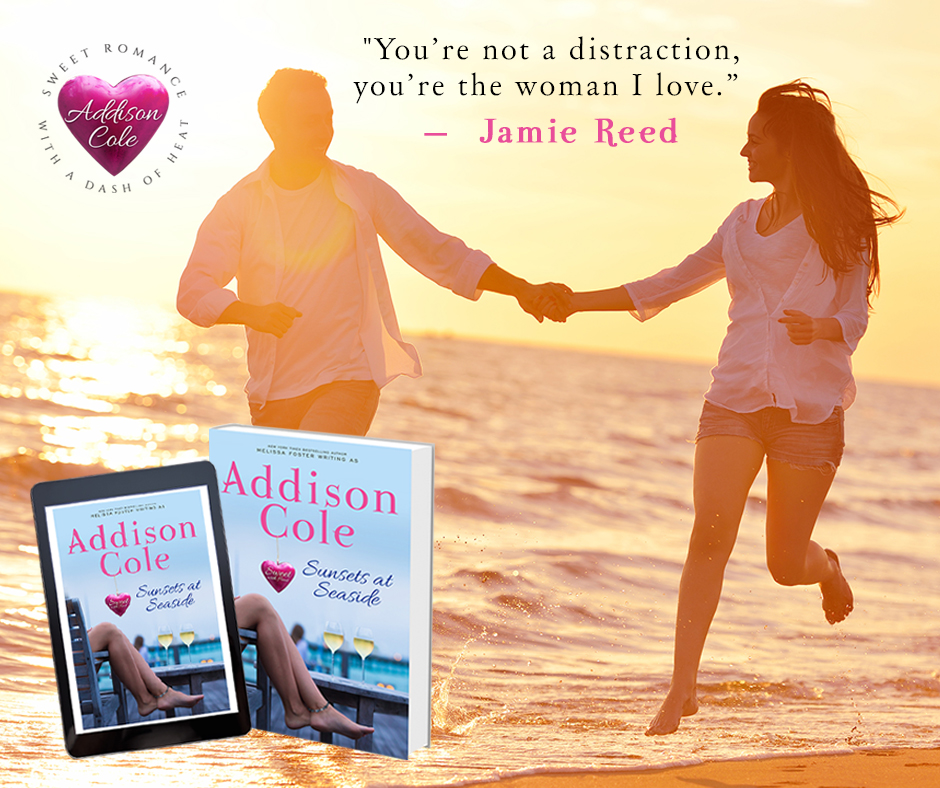 I have fallen right into all the Sweet with Heat books from Addison Cole. Each one focuses on one person in a group of friends I was already introduced to in previous books. Yet, I feel like I have been waiting for these stories for forever.

Set on Cape Cod – a place I have childhood memories of, I love reading about these friends who find their forever loves.

In this particular book, things switch up a bit as it is Jamie, one of the men, who is spending a summer on the Cape. In previous books, Jamie was too caught up in business to spend more than an occasional weekend with his friends on the Cape. This year, though, he is wanting to spend more time with his grandmother. In doing so, he meets Jessica. The sparks fly and Jamie starts ignoring work.

Unfortunately, Jessica is also a workaholic in her own right. She, though, cannot ignore when the symphony calls and she must return to Boston.

There are many obstacles for Jamie and Jessica to overcome but none are outrageous and they respond to these obstacles like friends of mine would.

I definitely recommend picking up Sunsets at Seaside and giving it a read.

2 thoughts on “Sunsets at Seaside – A Book Review”