NEW RELEASE….
The Ryders are a series of stand-alone romances that may also be enjoyed as part of the larger Love in Bloom series. These hot contemporary romance novels feature alpha male heroes and sexy, empowered women. They’re flawed, funny, passionate, and relatable to readers who enjoy passionate contemporary romance and women’s fiction.

In SWEPT INTO LOVE…
It’s been years since Sally Tuft’s husband died and she was left to raise her teenage son alone. And almost as long since she told the only other man she’d ever wanted that they should be just friends. Now her son has left for college and Sally has no distractions to keep her from thinking about her best friend and coworker, Gage Ryder, and what could have been.

Gage always believed that one day Sally would move past the death of her husband and they would finally explore the passion that’s simmered between them since the day they met. Tasked with opening a new youth center in Oak Falls, Virginia, Gage hopes the trip away is just what they need to finally come together.

Before Gage and Sally ever reach Oak Falls, one night at a conference changes everything, putting their friendship–and their love–on the line, and the two must decide if getting swept up in love is the beginning of forever, or the end of their friendship as they know it.

The RYDERS are part of the LOVE IN BLOOM big family romance collection. Each book may be read as a stand-alone novel, or as part of the series.

“You can always rely on Melissa Foster to deliver a story that’s fresh, emotional and entertaining. Make sure you have all night, because once you start you won’t want to stop reading. Every book’s a winner!” New York Times Bestselling Author Brenda Novak
. 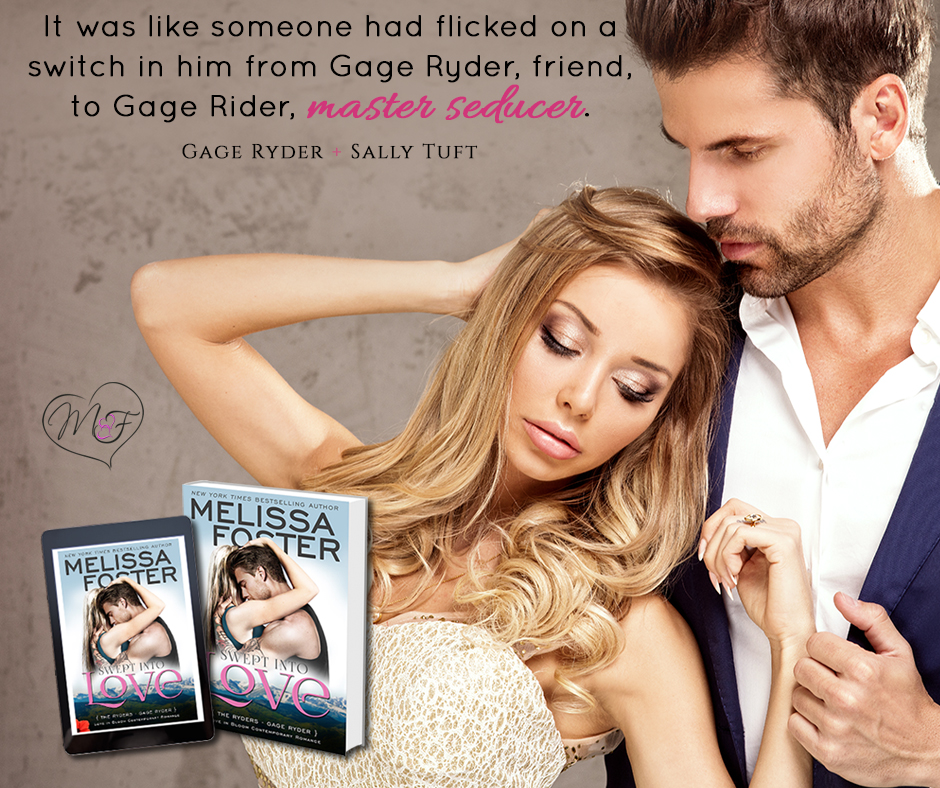 Also available in The Ryders
Each book may be read as a stand-alone novel, or as part of the series.

Seized by Love, Love in Bloom: The Ryders #1
YOU FELL IN love with Blue Ryder and Lizzie Barber in Seaside Summers, now follow their journey to find true love in SEIZED BY LOVE, the first book in the Ryder series.
Lizzie Barber runs a successful flower shop by day and secretly hosts the Naked Baker webcast at night to help pay for her younger sister’s education. To keep friends and family from finding out about her sexy secret, she’s put her social life on hold until her sister’s education is paid off and she can stop filming the webcast.
Blue Ryder fell hard for Lizzie Barber when he met her a year ago, and he hasn’t been able to get her off his mind since. Everything about the feisty little brunette, from her tight bod to her seductive smile, cuts straight to his heart. Though Lizzie has turned down every invitation he’s extended—Blue is not about to give up trying.
Renovating Lizzie’s kitchen brings Blue further into Lizzie’s life, and the oven is not the only thing heating up. One night and one powerful kiss changes everything. But when Lizzie’s secret is revealed and the safe bubble she’s hidden in shatters, true love may not be enough to put the pieces back together.
**CONTENT WARNING: Due to mature content, recommended for readers aged 18+**
Available to buy from …
Amazon.com   Amazon.co.uk   Barnes and Noble    KOBO    iBooks

Claimed by Love, Love in Bloom: The Ryders #2
Family law attorney Gabriella Liakos has one true love, Elpitha Island, where she grew up and hopes someday to return. But Elpitha is in financial ruins, and Gabriella will do anything to keep it from falling into the wrong hands.
Duke Ryder is a savvy real estate investor set on making Elpitha into an exclusive resort. Unlike other investors, he’s not scared of purchasing a property where one family has roots so deep they practically reach the ocean floor…until he meets his beautiful, stubborn, and enticing tour host―the daughter of the owner of most of the island.
Gabriella sets out to dissuade Duke from purchasing Elpitha, but Duke has other ideas. He wants Gabriella and the island. Duke’s powerful seduction draws Gabriella in, but can a savvy investor who’s used to glamour and glitz, and a woman interested in preserving the culture she adores find a happily ever after together?
**CONTENT WARNING: Due to mature content, recommended for readers aged 18+**
Available to buy from …
Amazon.com   Amazon.co.uk   Barnes and Noble    KOBO   iBooks

Chased by Love, Love in Bloom: The Ryders #3

Actress Trish Ryder takes her job seriously and has no time for those who don’t. When she’s awarded a major role in a new movie featuring America’s hottest rock star, Boone Stryker, she’s beyond excited. The six-two, tattooed hunk of burning desire is known for his dedication to his craft–but when he ditches their first meeting, she begins to wonder if he’s just another rocker with a great PR team.

Sex, booze, women, and music pretty much sum up Boone Stryker’s private world. He’s coasted through life playing by his own rules with plenty of people willing to cover his tracks, and he’s not likely to change–until he meets a woman who refuses to give him the time of day, much less anything more.

Sparks fly from the first moment Trish and Boone meet–Tensions run hot and desire runs hotter when they’re trapped together on a remote location with no place to hide. Will sparks ignite, or will a hurricane douse the flames?

Rescued by Love, Love in Bloom: The Ryders #4


As the daughter of a world-renowned fashion designer, Addison Dahl enjoyed a privileged life attending the most sought after parties, traveling around the world, and having anything she wanted. Until she broke free and went against her father’s wishes, needing to prove to herself–and to him–that she could make it on her own. Now she’s ready to take her adventures in a new direction and sets her sights on roughing it in the wilderness.

Jake Ryder followed in his father’s footsteps as a top search and rescue professional. He spends his days saving those in need and his nights in the arms of willing women who offer nothing more than a few hours of sexual enjoyment. Just the way he likes it.

When Jake’s sister-in-law calls, concerned because she’s been unable to reach her best friend, it’s up to Jake to find her and bring her home. But Addison isn’t lost, and she sure as hell isn’t going to be told what to do by an ornery mountain man with whom she’d spent one torrid weekend after her best friend’s wedding. Jake has never left anyone behind–will Addison be his first failed rescue? 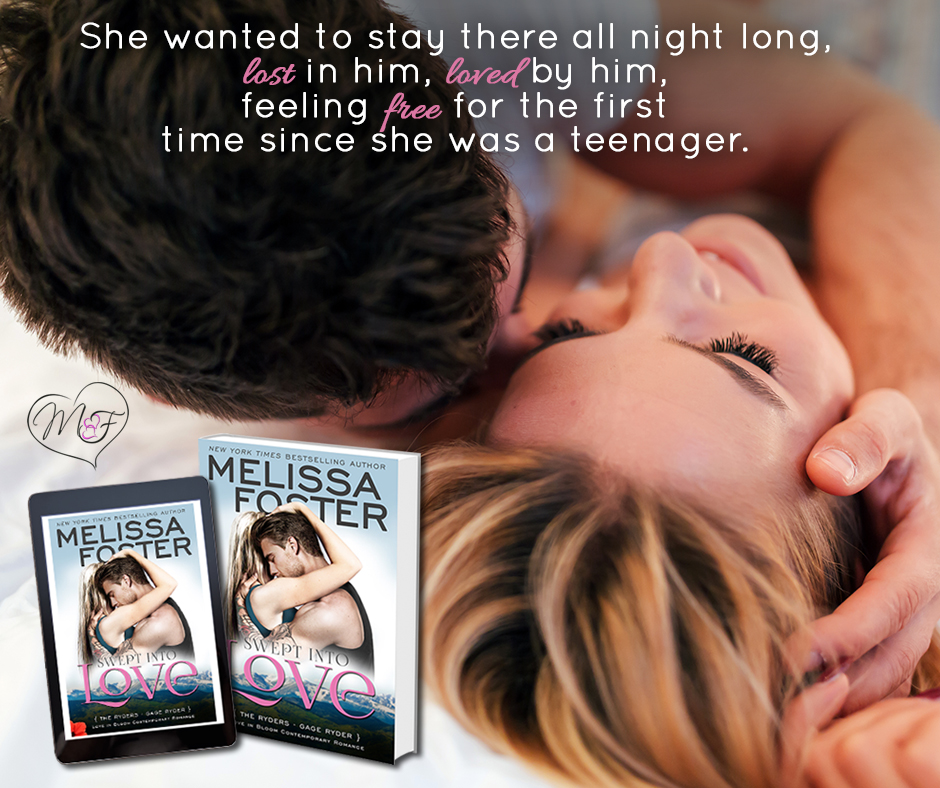 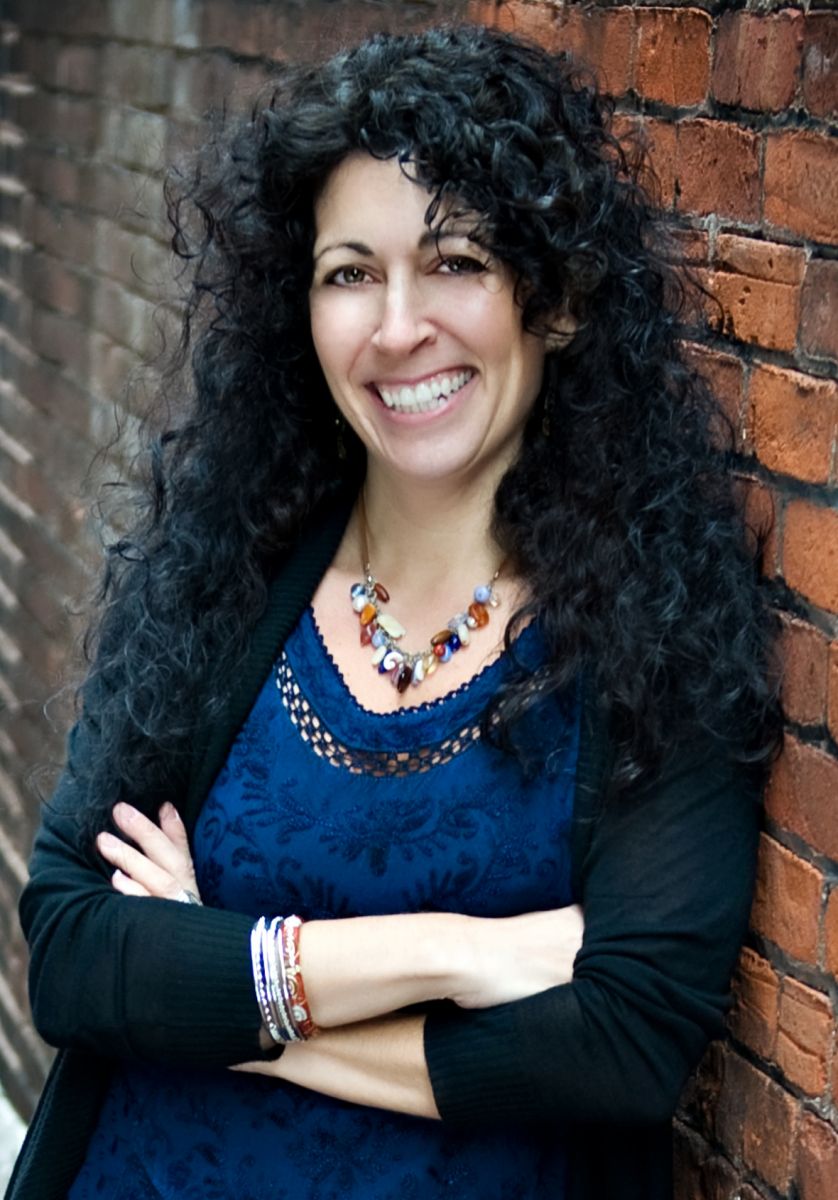 Melissa has painted and donated several murals to The Hospital for Sick Children in Washington, DC. Her interests include her family, reading, writing, painting, friends, helping others see the positive side of life, and visiting Cape Cod.

Melissa is available to chat with book clubs and welcomes comments and emails from her readers. Visit Melissa on Facebook
or her personal website.

Never miss a brand new release, special promotions or inside gossip again by simply signing up to receive your newsletter from Melissa.

Download Today -Sisters in Love (Snow Sisters), Lovers at Heart (The Bradens), Game of Love (The Remingtons), Seaside Dreams (Seaside Summers), and Taken by Love (The Bradens at Trusty).

I truly love Melissa Foster’s writing. Her ability to make you feel like the people in the book are friends of yours is always present. As a divorced, single mom, I can definitely relate to Sally. It was at least high school for my youngest before I seriously started dating. He was 2 when my marriage ended. I understand that maternal instinct that tells you to always put the best interests of the kid(s) first.

I had to laugh at the interesting happenings at the beginning of the book. While I have never been to a conference in Las Vegas, I could see some shenanigans going on. I was just slightly shocked at what these shenanigans were but it made me laugh pretty hard to start the book.

Still worrying about her adult son made me just fall a bit more in love with Sally. The fact that Gage would acquiesce to her worries and let her take her time in explaining the change in their relationship means he’s a keeper.

Definitely pick up Swept Into Love and any other book by Melissa Foster for a great read, wonderful settings and extremely believable characters.

2 thoughts on “Swept Into Love – A Book Review”