I was going to give each race its own separate post but somehow yesterday was lost in church work and a few other things that had to be done. Consequently, here are the two big races I have planned for the first half of this year and why I love running each.

I will be running the Blue Ridge Half Marathon in April. This is routinely the first Saturday after Boston and this year it is on the 22nd. I remember the year after the Boston Marathon attack. Security was high in Roanoke and I was amazed at the people on tops of buildings and the helicopters in the air – although, I’m sure one of those was from the local TV sponsor. I am going to have to go out of my comfort zone and find somewhere other than around the lake to run. I will need to do more of up behind where I live and possibly even on the mountain in Maggie Valley. 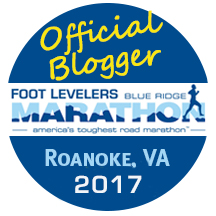 I love Blue Ridge for the challenge. Roanoke is a beautiful city, nestled in the Blue Ridge Mountains. I’ve always wanted to drive a good distance of the Blue Ridge Parkway and may be able to this time as I am only four hours away highway driving. Maybe I can either go up the Parkway or come home on it. This race goes to the tops of two mountains outside the city of Roanoke itself. You get to run past the famous Star. I just love this race. I’ve previously run the full in 2013 and the half in 2014. It’s been a few years since I’ve been back but I cannot wait to go to Roanoke again.

I not only love the route in Roanoke for the Blue Ridge Marathon and the half but I love the people who put the race on. Where else does the race director wait at the finish line to shake each finisher’s hand? I’m sure this is a bit difficult when there are bunches of people coming across the finish line but that doesn’t happen often at my finishing. 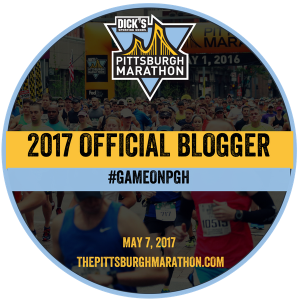 Two weeks after torturing myself in Roanoke – not really torture but people seem to think that is it – I head further north to Pittsburgh to run the UPMC Pittsburgh Half Marathon. This is again a race where I have run both the full and the half previously. This will mean little this year as there is a new course. The Pittsburgh Marathon was marathon number one in May of 2012. It was unseasonably warm and I finished in six hours and five minutes or so. The half I ran in 2013 and hooked back up with pacer Marcela Todd who was pacing a 5:30 marathon group. I hung with them until I got to where the half turned off. Marcela was the reason for my stellar finish in this half marathon. On top of that, I was showered and sitting at my daughter’s restaurant as the marathon group came past at approximately mile 21 (I think).

I went to college at West Virginia University, approximately an hour south of Pittsburgh, and have many pleasant memories of football and basketball against Pitt back in the day. When I ran the full in 2012, I was sure I would fall down once I stepped foot on the Pitt – not really but close – campus. I have a daughter, a daughter-in-law and a son living in Pittsburgh along with many friends so going to Pittsburgh is like going home in a sense.

I will be blogging throughout the next five months about my training for both of these wonderful events.

Should you want to run Pittsburgh with me, use the code CONROY17 to receive $10 off the half or the full.

Should you want to run in Roanoke with me, use the code BRMFRIENDS to receive 15% off any of the four races in Roanoke – the full, the half, the 10K or the double marathon. Yes, you can run 52.4 miles in Roanoke should you wish.

Have you ever been an official blogger for a race or other event? What was required of you? Did you get a discount code to share?