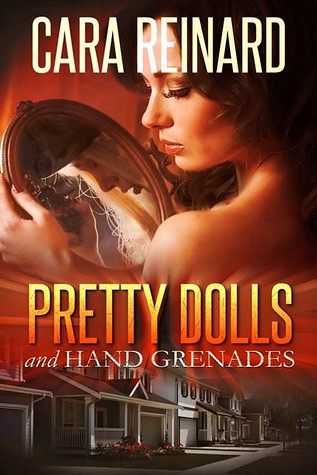 Thirty-something, Cecelia Laramie, strives for excellence like the other housewives in her quiet suburban neighborhood. Cece’s a bit eccentric with her elaborate doll collection and bouts of OCD, so when she finds out her well-to-do husband is misbehaving, she decides to nip it in the bud—with a baseball bat.

Getting revenge on her husband for his indiscretions becomes Cece’s newest obsession, but when another jilted housewife joins her cause, things go awry. Cece’s cutthroat accomplice pushes her to commit crimes throughout Manhattan, sabotaging her husband’s real estate business. When her counterpart introduces deadly weapons into the mix, Cece knows she’s in over her head.

Cece’s a bundle of nerves; she’s a housewife, not a terrorist. Her new partner is nothing but trouble, but if the mysterious woman can help her reclaim her old life, Cece’s in. She just hopes their crazy antics don’t land her a spot in prison first.

Available to pre-order at….
Amazon   Barnes and Noble   iBooks   Kobo   GPlay
A little excerpt from the book……

Panting now, I couldn’t help thinking about the eruption of clapping at Mitchell’s words as if he’d said nothing wrong. My mind retreated back to the crowd of dark suits and dresses rising in standing ovation, as I remained seated in a special state of confusion.


I sensed an obvious discomfort at my banquet table. The wife next to me raised her eyebrows and gave me an open-mouthed, super-smile, which said, “Yes, that was inappropriate for him to say, and yes, we all noticed.”


All the color must’ve drained from my face as I remembered locking eyes with Mitchell amid the applause before he darted behind the big black curtain. She was only his assistant, right? Was I overreacting? Was he genuinely indebted to her or was he purposely trying to disrespect me? My ears were ringing now and my head was going to explode. I’d had migraines before, but this was the mother of all migraines. I shut my eyes and splashed a little water on my face, trying to quell the fire in my head. When I opened my eyes I saw a woman.

Cara Reinard is an author of women’s fiction and domestic thrillers. While attending college, she was an editor for her student newspaper, and also sold advertising space for the publication. Even though she’s always had a passion for writing, Cara found she had a knack for persuading people with the art of verbal prose, known as sales, which she’s done now for over a decade. Cara currently lives in the Pittsburgh Area with her husband, two children, and fluffy Bernese Mountain dog. When she’s not hustling or chasing tiny footsteps–she’s writing.

At first glance – meaning the title and the cover, I was not really sure what this book would hold. I do like a good surprise so I decided I would pick it up and read through it to figure it out.

I was unsure where CeCe was going after the opening of the book. Yes, her husband was a jerk. Did she really want to leave him or did she want to try again? Then, once he was living with his girlfriend and assistant, who was this odd woman she was meeting and discussing revenge with?

It took really concentrating to figure the entire book out. I love a good book that makes me think hard and goes in a direction that I do not expect. I am sure you will love the way this book’s plot travels. It is complex and will leave you wondering, if you set the book down before finishing, what you forgot to read or what you just forgot. Pick up Cara Reinard’s Pretty Dolls and Hand Grenades and see if you get the same feeling I did. 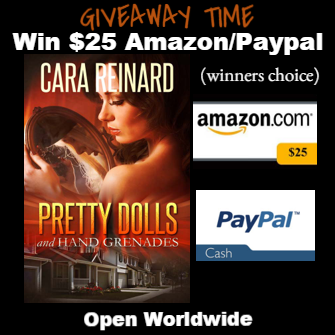 2 thoughts on “Pretty Dolls and Hand Grenades – A Book Review”