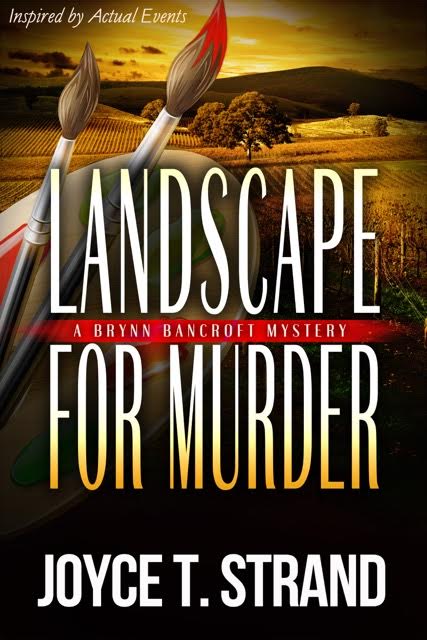 
A friend’s murder. An unconnected cast of suspects, including the victim’s missing adult daughter. As if that wasn’t enough, Brynn Bancroft’s winery has been broken into. Can she deal with her co-owner ex and help the police find her friend’s murder so she can finally overcome her own troubled past and enjoy family life with her teenage ward?

Brynn Bancroft evolved from the Jillian Hillcrest mysteries where she served as Jillian’s manager while Chief Financial Officer of Harmonia Therapeutics in Silicon Valley. A shapely blonde with a MENSA IQ, she had an affair with the CEO of the company.Unfortunately for Brynn, the CEO’s wife figured out that the two were involved and asked Brynn to leave the company, which she agreed to do.

In the meantime, her husband, Liam—not unfamiliar with extramarital affairs himself but also understanding that Brynn grew up in an abusive household- grew tired of waiting for Brynn to commit to their relationship and asked for a divorce. At the same time, he solicited her assistance in developing his new winery in Sonoma County, Calif.

Much like Jillian–who does appear in the Brynn Bancroft mysteries–Brynn, too, attracts mystery and murders as she grows to enjoy life at her ex-husband’s Hilltop Sunset Winery.

Brynn Bancroft learns that a former employee who beat her nearly to death
has returned to stalk her and her friend, Jillian Hillcrest, also a former victim.

Recently divorced, Brynn turns to a new love interest only to encounter additional unwelcome issues. Meanwhile, short-timer Brynn, who has resigned from her Silicon Valley company, becomes bored fulfilling her remaining responsibilities there. She begins to prefer supporting the launch of her ex-husband’s new hilltop winery while waiting to move to her next position. Between her stalker and her new love interest, Brynn faces a series of life-changing events.

Book available from….
Amazon.co.uk   Amazon.com   Barnes & Noble
About the Author

Joyce T. Strand is the author of who-done-it mysteries set in the San Francisco Silicon Valley and Napa-Sonoma wine regions of California.Her most recent novel, Landscape for Murder, follows Hilltop Sunset which was the first of a new series featuring protagonist Brynn Bancroft, a financial guru in transition to winemaker from corporate executive. Brynn Bancroft is a minor character in Strand’s novels On Message, Open Meetings, and Fair Disclosure–three mysteries solved by Jillian Hillcrest, a publicist whose boss was Chief Financial Officer Brynn Bancroft.

Much like her protagonist Jillian Hillcrest, Joyce Strand headed corporate communications at several biotech and high-tech companies in California’s Silicon Valley for more than 25 years. Unlike Jillian, however, she did not encounter murder in her career. She focused on writing by-lined articles, press releases, white papers, and brochures to publicize her companies and their products.

Strand has been a mystery fan since she read her first Nancy Drew and Hardy Boy stories as a teenager. She admits that in between reading Agatha Christie, Ian Fleming, Erle Stanley Gardner, and John McDonald in her youth, she also checked out Tolstoy, Steinbeck, Faulkner, and Dostoyevsky, but her love of the “puzzle” always drew her back to the latest fictional detective. Today she favors John Grisham, Louise Penney, Linwood Barclay, Michael Connelly, and Stieg Larsson. She has always enjoyed the challenge of following clues to solve the puzzle of a mystery before it is revealed.

Joyce lives with her two cats and collection of cow statuary in Southern California, and seeks out and attends as many Broadway musicals and other stage plays as possible.

She received her Ph.D. from the George Washington University, Washington, D.C. and her B.A. from Dickinson College, Carlisle, PA.

First, let me say that I am definitely looking into reading additional Brynn Bancroft Mysteries. This is a great book as a standalone but it made me want more of these characters.

Characters! Yes, Joyce T. Strand does a great job bringing characters to life. Everyone from Brynn to her ward who is just a teenager are people you could run into in everyday life. I love that about books, when the characters seem like people in my life or people who could be in my life.

The setting at a winery in Sonoma, actually outside Sonoma, is an area I am familiar with. I was in Sonoma just last year as I visited my cousin and his wife who life there. It is a beautiful area and the perfect setting for this book. I am also familiar with the Point Reyes area which is part of this particular book. These are areas of California that are both beautiful to those who live there and to those of us who visit.

I can truthfully say that I did not see all the twists in this plot coming. There were times when I guessed what was coming next and was totally wrong. That does not happen very often with my mystery reading. I was pleasantly surprised.

I recommend you go out and pick this book up. 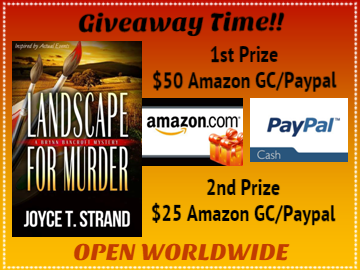 Enter Below and Good Luck !!
a Rafflecopter giveaway

4 thoughts on “Landscape for Murder – A Book Review”