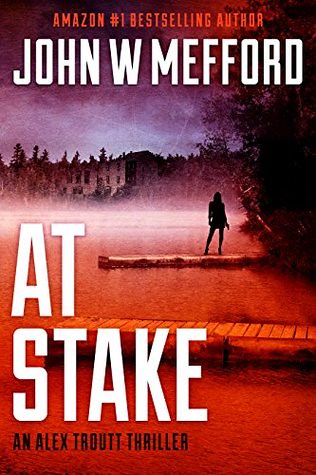 A desperate attempt to survive, or the plot of a twisted killer? Bombs rip through the Boston Marathon crowd. Just like the last time, hysteria engulfs New England. Alex’s injured partner clings to life, and she won’t sleep until the culprit is found. Can she push her way on to the task force?

Rumors swirl, but hard evidence is as elusive as an icy glacier. With her FBI team wrapped up in the formal investigation, Alex pulls in her newest confidante. Ozzie and Alex team up to quickly separate fact from fiction. But what seems right could be so very wrong.

A brutal murder and robbery. Where is this hunt taking them? Could it be nothing more than a cover?

Secrets from the past come to light, and that’s when all bets are off. You think it’s over, but it’s not. Not by a long shot. The brains behind this crime aren’t from this world, and Alex’s family may not be able to escape the carnage.

Can Alex handle losing another family member to a sick, twisted person?

The ties that bind people are impossible to detect…especially those with long-standing vendettas. It’s a harrowing race to get to the killer…even as soldiers of death continue to make their mark on the city of Boston.

Will Alex survive the onslaught?

Get AT Stake now!

Books in the Alex Troutt Thrillers:
AT Stake
AT Any Costs
TBD
TBD
TBD
TBD
The Scoop
By now you’re probably aware that the Alex Troutt thrillers, Ivy Nash thrillers, and the Ozzie Novak thrillers are all under the same Redemption Thriller Series umbrella. Why? Because, ultimately, they all connect — Alex, Ivy, Ozzie. How? That’s part of the mystery that I’m slowly unveiling throughout the Redemption Thriller Series.Through each sub-series, characters from different books appear in the other novels. If it adds suspense, intrigue, or even a good laugh, I’ve included a cross-over character — it’s a lot more fun that way. Plus — and here’s the real kicker — the final six novels will bring all of the major characters together — Alex, Ivy, Ozzie. It will be explosive and gut-wrenching…in a way that will leave you breathless.
About the Author

I have always known that there would be an Alex Troutt book with the Boston Marathon in it. I just hoped it would not involve bombs at the marathon. I had some trouble getting past this part of the book. No, I wasn’t in Boston the year the bombs went off. I was there, at the exact spot on had detonated, three years earlier. I could go back and look through my photos and pinpoint things that I was then watching on the news. I also had some issues with distances when it came to the marathon scenes at the beginning of the book but that all being said, I really enjoyed the reading of this Redemption Thriller Series.

John Mefford has come up with a great idea to have three different thriller/mystery series that can crossover into each other. This particular book finds Ozzie Novak in Boston with Alex Troutt. It also finds Ivy Nash’s police contact Stan in town for the marathon. That ties together three series in one book. That takes great writing skill.

The underlying romantic tension between Alex and her younger boyfriend Brad continues through this book. It is not simply a thriller but has a romance part to it. I also have to say that I am looking forward to the next book after reading the ending of this one.

You should pick up a copy of this John Mefford thriller, AT Stake. Even if you haven’t read any of the other thrillers in this series, you will truly enjoy this book. 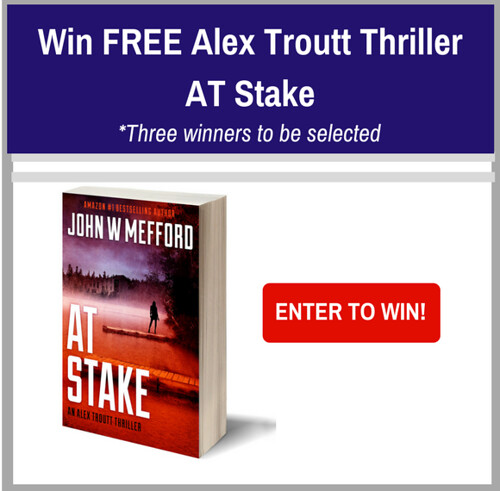