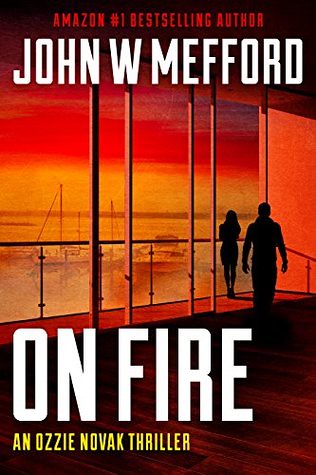 
Rainmakers rule – but nothing influences another man more than two bullets in the back of the head. A beautiful, ambitious woman is murdered. No one would have noticed if the person charged was anyone other than a lobbyist — one of the most powerful deal-makers in the world.

Ozzie is pulled into to help prove the egomaniac’s innocence. Early on, the evidence seems irrefutable…until it isn’t. Could who this man knows determine who lives and who dies?

Ozzie uncovers damaging information. His immediate reaction? Rage. The lobbyist had played a key role in helping destroy Ozzie’s old life. So how can Ozzie now help the man avoid a murder charge?

Forced to make a deal with the devil, Ozzie must determine how to out think the king of rainmakers. And that’s when Ozzie realizes this isn’t just a one-lane game.

Ozzie flexes his own power of persuasion to fight through the haze of threats and outright danger. With everything on line, Ozzie’s instincts take him to the brink of death.

In the end, innocent people will die. Can Ozzie save his family from something he can’t see?

Get ON Fire now!

ON Edge – book 13
Game ON – book 14
ON The Rocks – book 15
Shame ON You – book 16
ON Fire – book 17
ON The Run – book 18 (releasing Mar 13th – pre-order here)
The Scoop
By now you’re probably aware that the Alex Troutt thrillers, Ivy Nash thrillers, and the soon-to-be-released Ozzie Novak thrillers are all under the same Redemption Thriller Series umbrella. Why? Because, ultimately, they all connect — Alex, Ivy, Ozzie. How? That’s part of the mystery that I’m slowly unveiling throughout the Redemption Thriller Series.Through each sub-series, characters from different books appear in the other novels. If it adds suspense, intrigue, or even a good laugh, I’ve included a cross-over character — it’s a lot more fun that way. Plus — and here’s the real kicker — I’ll write a final six novels that brings all of the major characters together — Alex, Ivy, Ozzie. It will be explosive and gut-wrenching…in a way that will leave you breathless. At least that’s my hope.

John W Mefford’s Redemption Thriller series has had me waiting for the next book each time I read one. ON Fire was no exception. I basically cannot wait to renew the reading of Ozzie Novak’s life. Granted, mine is nothing like his but I feel like I can relate somehow.

This book starts off with the murder in question. Not all of the Ozzie books begin with intrigue. I had to try and figure out what was happening in Ozzie’s life that this murder fit into but it really, on the surface didn’t have any connection. As the story, and the mystery, unfolds, the connection to Ozzie becomes clearer.

Mefford is good at making sure that the details from previous books actually have a reason to be in the next one. That being said, you could easily read this book as a standalone. I am sure once you do, you would want to go back and read the previous one.

Definitely pick this one up and give it a read! I have volunteered to share my review and all the opinions are 100% my own. 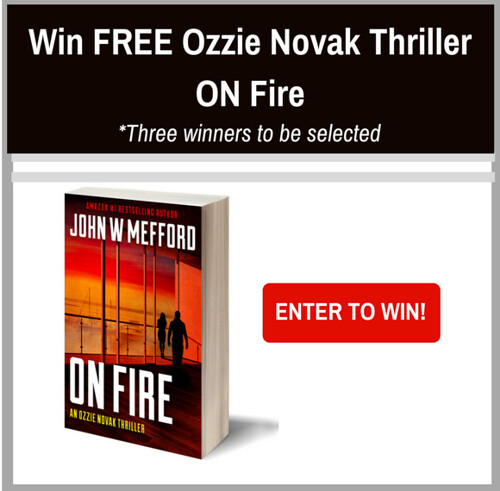