NEW RELEASE……..
Sweet with Heat: Seaside Summers features a group of fun, flirty, and emotional friends who gather each summer at their Cape Cod cottages. They’re sassy, flawed, and so easy to relate to, you’ll be begging to enter their circle of friends! All books can be read as stand-alone novels.

Secrets at Seaside by Addison Cole is the sweet edition of New York Times bestselling author Melissa Foster’s steamy romance novel Seaside Secrets. The stories and characters remain the same and convey all of the passion you expect between two people in love, without any explicit scenes or harsh language.

In SECRETS at SEASIDE…
Tony Black is the hottest surfer on the planet. He travels the world throughout the year and spends his summers on Cape Cod with his friends, at the Seaside cottages in Wellfleet, Massachusetts. He’s got his choice of women, but Amy Maples is the one he wants. Fourteen years ago she was his for an entire summer, until a devastating accident changed everything, and what they had seemed like it had never existed—at least for her.

Amy Maples is as consistent as the day is long. She’s spent summers on Cape Cod forever, she always does the right thing, and she’s spent years trying to reclaim the heart of Tony Black, the only man she’s ever loved. She’s back for a summer of fun with her friends at Seaside, only this year she’s been offered the opportunity of a lifetime thousands of miles away, and she’s decided to try one last time to reconnect with Tony. But having a relationship with Tony means dealing with her past—and dealing with her past may knock her to her knees. 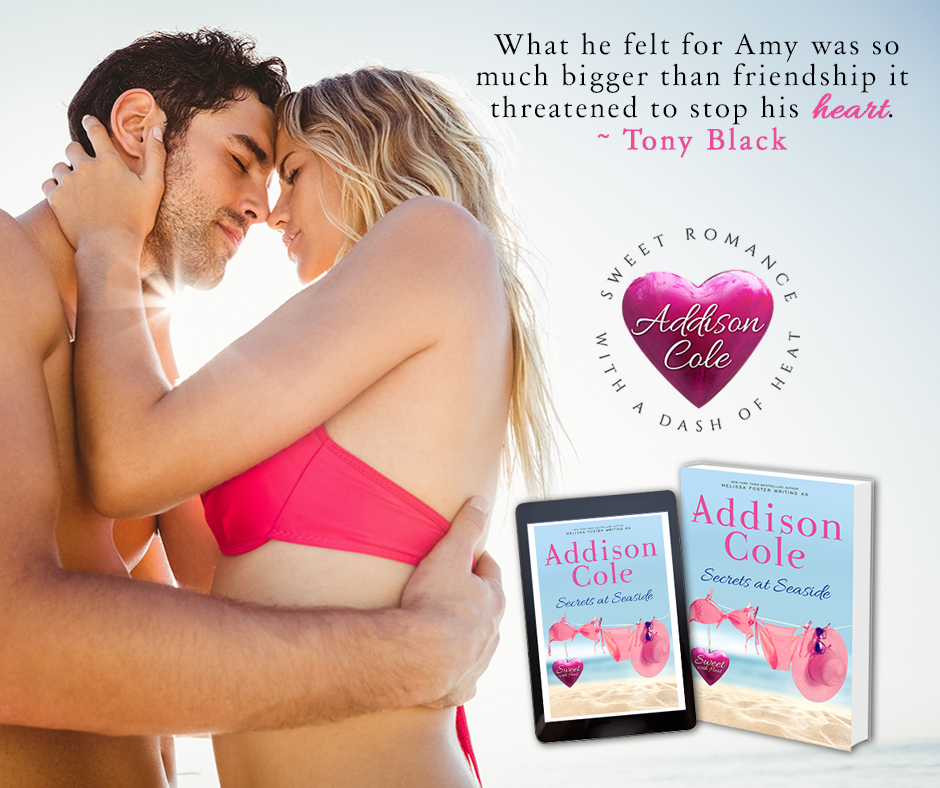 Bella Abbascia has returned to Seaside Cottages in Wellfleet, Massachusetts, as she does every summer. Only this year, Bella has more on her mind than sunbathing and skinny-dipping with her girlfriends. She’s quit her job, put her house on the market, and sworn off relationships while she builds a new life in her favorite place on earth. That is, until good-time Bella’s prank takes a bad turn and a handsome police officer appears on the scene.
Single father and police officer Caden Grant left Boston with his fourteen-year-old son, Evan, after his partner was killed in the line of duty. He hopes to find a safer life in the small resort town of Wellfleet, and when he meets Bella during a night patrol shift, he realizes he’s found the one thing he’d never allowed himself to hope for—or even realized he was missing.
After fourteen years of focusing solely on his son, Caden cannot resist the intense attraction he feels toward beautiful Bella, and Bella’s powerless to fight the heat of their budding romance. But starting over proves more difficult than either of them imagined, and when Evan gets mixed up with the wrong kids, Caden’s loyalty is put to the test. Will he give up everything to protect his son—even Bella?
Dreaming at Seaside is the sweet edition of the steamy romance novel Seaside Dreams by New York Times bestselling author Melissa Foster.
Available to buy from …
Amazon.com   Amazon.co.uk   Barnes and Noble    KOBO    iBooks   GPlay   Paperback
Hearts at Seaside (Sweet with Heat: Seaside Summers Book 3)

Jenna Ward is vivacious, spontaneous, and confident—except when she’s around the man who stole her heart years earlier, strikingly handsome, quiet, and reliable Pete Lacroux. After years of trying to get his attention and overwhelmed from dealing with her mother’s new cougar lifestyle, Jenna’s giving up on Peter—and is ready to explore other men.
As the eldest of five siblings, with an alcoholic father to care for, boat craftsman Pete Lacroux always does the right thing and has no time for a real relationship. He’s looking forward to seeing his friend Jenna, a welcome distraction who’s so sexy and painfully shy that she equally entertains and confuses him.
When Jenna picks up a hard-bodied construction worker, jealousy ignites Pete’s true feelings, and he’s unable to ignore the desires for Jenna he never realized he had. But Pete’s not the quiet guy he appears to be, and his life is anything but conducive to a relationship. Can Jenna handle the real Pete Lacroux—the most alpha male she’s ever seen—or will she crack under pressure? And can Pete reclaim the life he once had without tearing apart his family?
Hearts at Seaside is the sweet edition of the steamy romance novel Seaside Hearts by New York Times bestselling author Melissa Foster.
Available to buy from …
Amazon.com   Amazon.co.uk   Barnes and Noble    KOBO    iBooks   GPlay   Paperback
Sunsets at Seaside (Sweet with Heat: Seaside Summers Book 4) 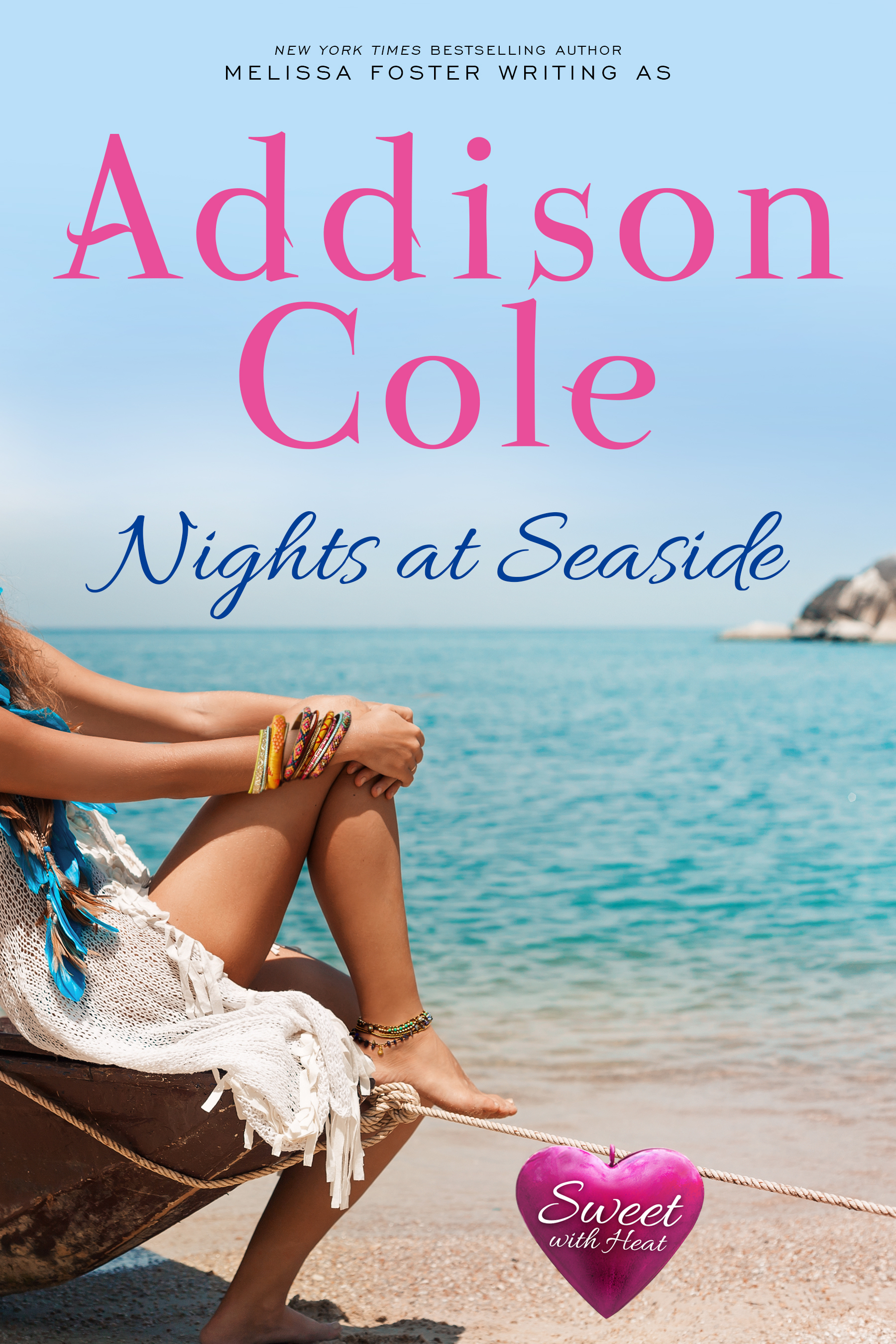 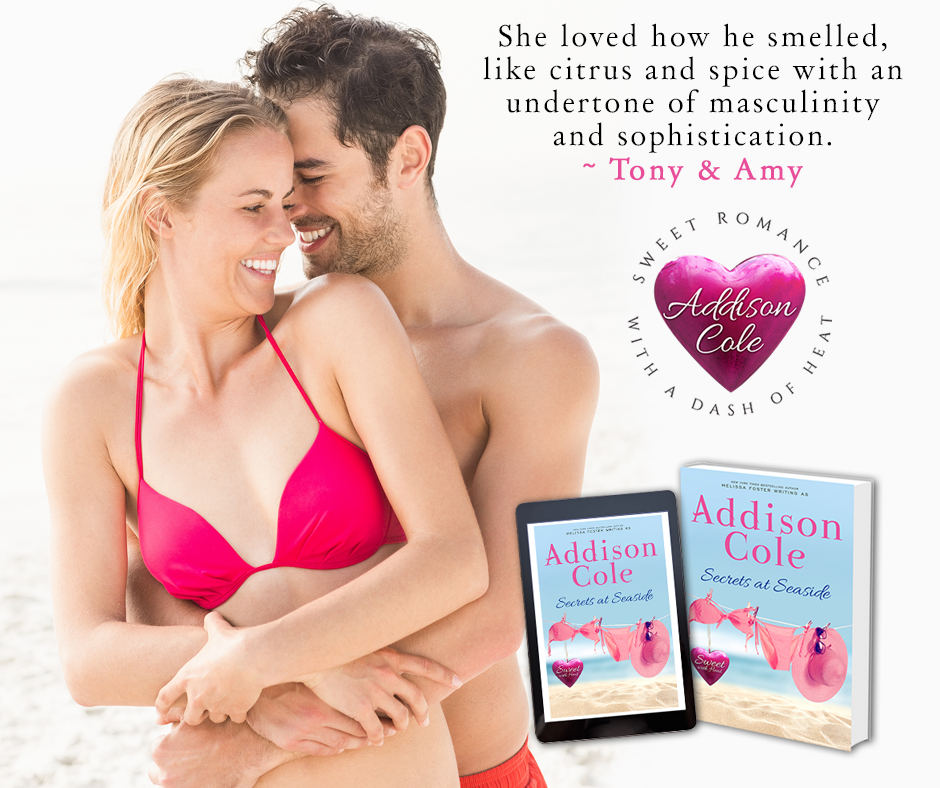 Tony and Amy were always two of my favorites in the Seaside gang. This book makes them that, even more so. I found out more about the history of Tony and Amy’s friendship in Secrets at Seaside. This made the two of them more real in my mind.

As I’ve said with the books written by Addison Cole , I love Cape Cod. I may be a mountain girl at heart but the Cape is a place I’ve been and I have fond memories of a family vacation there. Of course, at 16, I thought I should have more freedom than I was allowed but I still have great memories of this place.

Definitely pick up Secrets at Seaside by Addison Cole. You will not regret it. I received this book through Beck Valley Books Book Tours, I have volunteered to share my review and all the opinions are 100% my own. 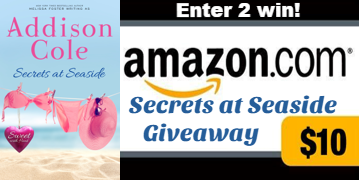 2 thoughts on “Secrets at Seaside – A Book Review”