NEW SERIES….
Alex Troutt Thriller Series #1
AT Bay
Alexandra Giordano never knew she had it so good. Until it was all gone in an instant.

As she begins her daunting quest to uncover the black spots on her memory, what she finds isn’t sweet or charming or even pleasant. And that’s when she begins to question everything, including herself.

Her work as a Special Agent for the FBI is only a distraction, serving as a mental metronome…anything to crank the gears of her feeble mind.

And then it happens—a bizarre, ritualistic murder. She loses herself in her work, fully immersed
in the investigation. Unable to recall even her own kids, she’s somehow able to formulate
coherent theories on what type of person could pull off such a sickening act.

As her mind slowly plugs a few memory gaps, her emotions are scrambled by the reality of her
worlds colliding. And the resulting explosion tears her in two.

Can she pick up all the incendiary fragments to solve the twisted crime while she clings to some
semblance of sanity?

One woman can only keep so much…AT Bay.

I have read and reviewed another book by John W Mefford. I was unsure how I would like this one with a different lead character but Mefford has made a very believable Alex in this book and I am glad I got started at the beginning of the series. I would not want to play catch up.

Let’s start with I love a good mystery. This one led me to jump to all kinds of conclusions, trying to guess what was coming next, but I never got it quite right until the very end.

Next, Boston is one of my favorite cities in the country. I will read a book just because it is set in Boston. I am not at all disappointed by the setting of this first Alex Troutt mystery in Boston. I love everything from the museums and coffee shops described to the various water spots to the Back Bay.

I am waiting with bated breath to see what is next for Alex. Pick up this and start reading so that you are ready when book two comes out. 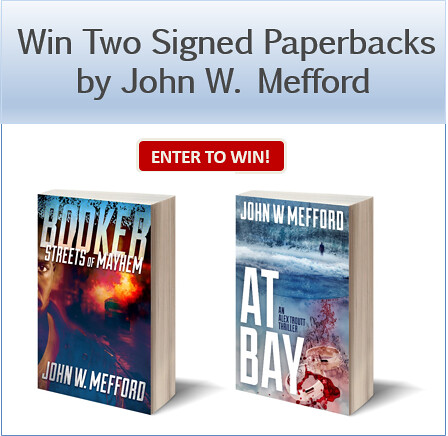 One thought on “Alex Troutt, New Series – A Book Review”