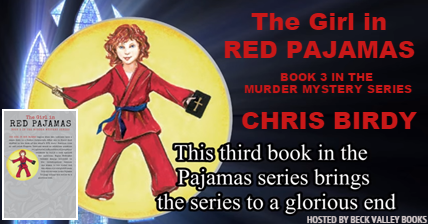 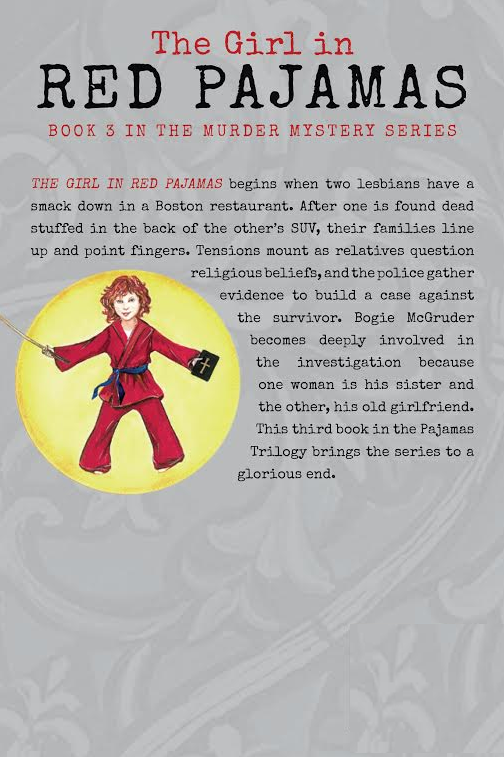 The Girl in Red Pajamas begins when two lesbians have a smack down in a Boston restaurant. After one is found dead stuffed in the back of the other’s SUV, their families line up and point fingers. Tensions mount as relatives question religious beliefs, and the police gather evidence to build a case against the survivor. Bogie McGruder becomes deeply involved in the investigation because one woman is his sister and the other, his old girlfriend.

This third book in the Pajamas Trilogy brings the series to a glorious end.

“The Girl in Red Pajamas is exciting, suspenseful, and just an excellent mystery.” – Reviewed by Tracy A. Fischer for Readers’ Favorite

“Chris Birdy has done it again! She has intertwined a superb murder mystery with a down to earth journey into the lives of a very loving extended family.” – review from Amazon

“It was mesmerizing, fantastically written, and one of the best books I’ve read this year. I highly recommend it!.” – review from Amazon

The Girl in White Pajamas

When Officer Bud the PR face of the Boston Police Department is gunned down, his brother, Bogie McGruder, returns from Palm Beach for the funeral. Since the BPD is investigating the death of one of their own, Bogie believes his trip to Boston will be a short condolence visit and a chance to meet his secret love child.

But interacting with a family fueled by alcohol and mired in scandals, Bogie is reminded why he does investigations for his Boston based company from a computer in Florida. Although Bogie wants to contact his ex-lover, Bailey Hampfield, he’s reluctant to do so since Bailey dumped him four years earlier. Knowing that Bailey had his child after she cut him loose, Bogie ponders how he can establish a relationship with the three year old daughter he’s never met. While he thinks about it, Bailey gets in touch with him and asks for protection. Someone is trying to kill her.

By the time Bogie meets Isabella, it’s apparent that he still loves the mother and adores the child. Bogie tells himself that he’s not interested in the BPD investigation into Bud’s death, but he continues to be drawn into it while trying to discover who is attempting to kill Bailey. The investigations seem to parallel each other, then intersect and become intertwined. As the story develops, Isabella, a precocious child obsessed with martial arts, slowly becomes the focus.

The underlying theme of this mystery is lies. Everyone seems to be running on lies and half truths. The only pure and true character is The Girl in White Pajamas.

The Girl in Black Pajamas

R&B Investigations is under attack. Their employee is shot in the back as he enters the building, and a hacker is trying to compromise their secure network. While the Boston police investigate the shooting, Bogie McGruder needs to find the culprit who is trying to put them out of business.

Bogie and his partner Rose Jones can’t disclose their internet problems to the cops since Bogie is a hacker himself.

Bogie McGruder returns to Boston with his four- year-old daughter Isabella. He joins up with Rose Jones’ uncle Walter who is fresh for Lompoc Prison. Bogie and Walter strengthen their firewalls while they try to determine who is behind the invasion. As the R&B team hones in on the culprit, they uncover several murders and discover a plot to wipe out the financial institutions in Boston.

While Bogie is in Boston, his extended family in Palm Beach becomes enmeshed in a sex scandal that threatens to ruin lives and careers in the Palm Beach Sheriff’s Office.

Feeling like a wishbone about to snap, Bogie tries to handle problems in both cities while Isabella continues her quest for someone to teach her the Five-Point-Palm-Exploding-Heart technique as seen in Kill Bill Volume 2.

This tale of murder, revenge and greed takes the reader on a whirlwind trip from Boston to Palm Beach and back. Buckle your seatbelt!

The Girl in Red Pajamas, the final book in the award-winning mystery trilogy has just been released. This book deals with the question: HOW MANY LIVES CAN THE SELF-RIGHTEOUS DESTROY?

Background: For almost twenty-five years, I did investigative work for small law firms conducting business in rough housing projects and crack house neighborhoods. I met with clients in every jail in the area even the now defunct Charles Street Jail and Deer Island House of Corrections. On good days, I got to take the .25 caliber handgun out of my pocket and the 9mm out of my purse and go to court. Then the real show began!

Several years ago, while sitting in a courtroom with a client, I watched as a police officer was lambasted by an attorney. The attorney was defending a young woman who crashed her car into two other vehicles before she passed out drunk behind the wheel. The occupants of the other cars were seriously hurt and the cop, a former EMT, tried to assist the injured while waiting for ambulances to arrive. The attorney questioned the cop’s every move, shredded his testimony and made him seem inept.

Embarrassed, the cop returned to his seat beside me and muttered, “Everybody lies. The judges lie, the lawyers lie, the witnesses lie..” I wanted to tell him not to worry that in about five years he’d be just as good a liar as they were.

The seeds for The Girl in White Pajamas (the first book in the series) were planted in that courtroom.

Find the author on the following sites… 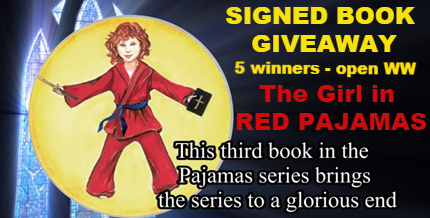 Enter Below and Good Luck!!

One thought on “Check Out The Girl in Red Pajamas”