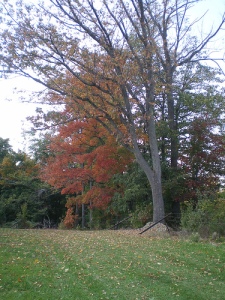 This morning’s walk/run was done without an mp3 player as my son’s iPod shuffle was dead and he hadn’t charged it yesterday and my other son’s RCA Lyra was still in his ears. I headed out with just a timer and myself.

This is the first true walk of fall. I actually wore warmup pants and a long sleeve tee-shirt. It was only 45F when I left the house. Since the last couple of days had been spent doing routines on on-demand television due to darkness and weather constraints, I was anxious to get back outside. Time in the out of doors is difficult to come by once there are plows on the roads. I don\’t live where there are sidewalks so it becomes a hazard to try to go on the roads once snow starts.

This morning, because my ears where unhampered by the music of an iPod or Lyra, I could hear more than just the cars passing. As I approached the first bridge on the walk, I could actually hear water running in the creek. Now there was not much water, as last week it had been dry, but still, the movement over the rocks. I turned my head to look south down the creek to see just how full the creekbed was and there was the first site – a blue heron! I was sooo excited as I know there are a few of them on the creeks nearby but you seldom see them. This was just a single blue heron but beautiful and majestic. I wished I had taken my camera with me as what are the chances I will see it again.

I continued to the next road and took a left down there. This road runs along side the next creek on my walks. The leaves were rustling on the trees. I could hear, as I continued up the small elevation, a squirrel or maybe chipmunk running through the leaves on the ground. It had to have been one of those two as there was too much leaf noise for a snake and too little for a rabbit or larger animal.

I could see leaves falling from the trees as I turned to start the loop back to home. The road smelled slightly as it had been freshly oiled and loose stone laid on it. As I hit the road I lived on again, I was hearing different noises. There were more vehicles in this area but then, to my grateful eyes joy, a blue jay appeared to the side in a tree.

What a wonderful morning!!