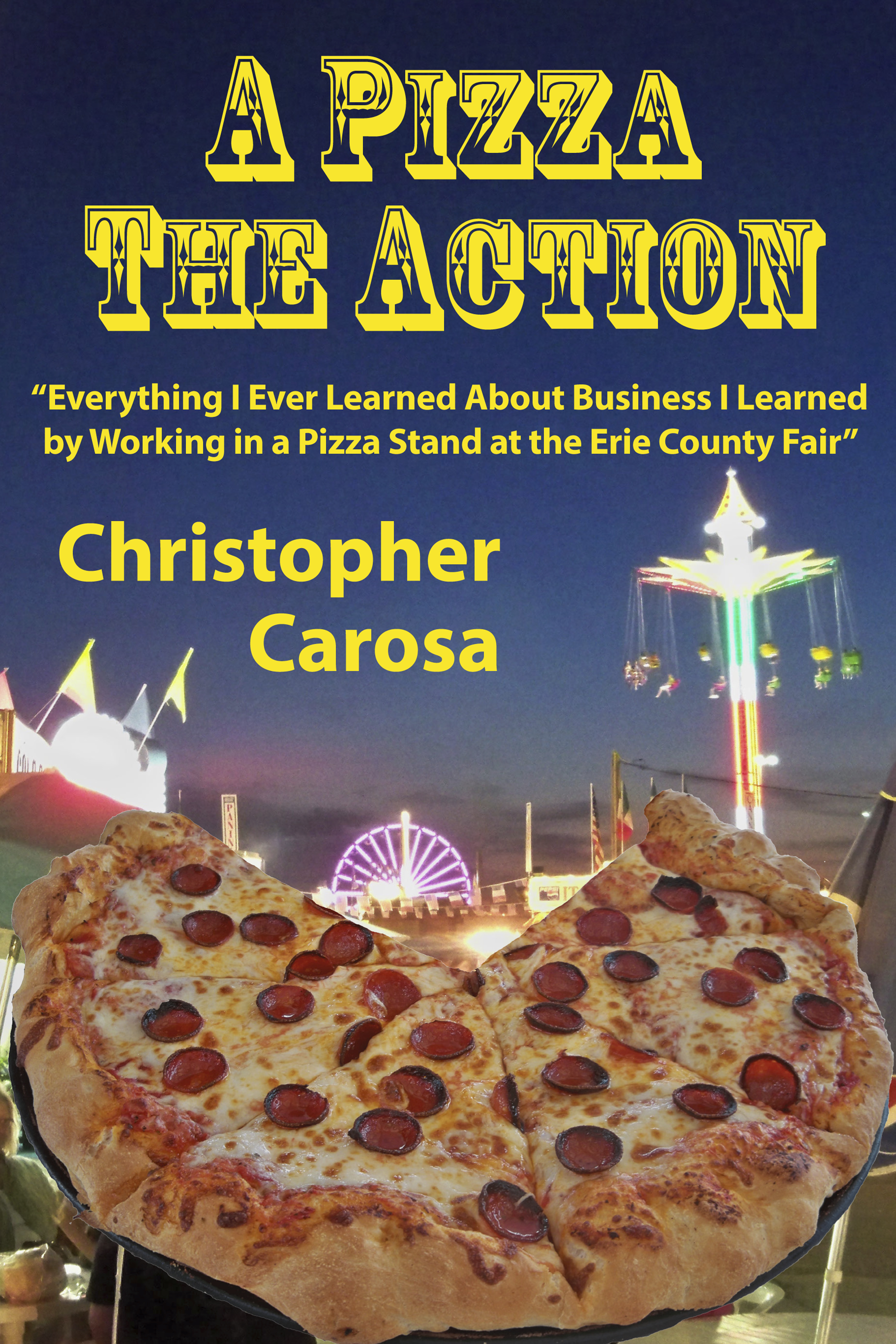 Remember when you dreamed of running away with the circus? Remember when you fantasized becoming rich enough to exceed your wildest wishes? Imagine a place where those desires come true… A Pizza The Action takes you to that place and beyond.

You know how it amazes you that, living only on loose change, carnival barkers can stay in business? It makes you wonder. You really want to know what their secret is and, just maybe, how you can use it to achieve your own ambitions. A Pizza The Action shows anyone selling anything for the first time or a long time how to capture that mysterious drive that will increase wealth by revealing the real truth behind the Carney Code. Spoiler Alert: Wealth is more than making money, although making money is part of being wealthy.
A Pizza The Action takes you into the very cauldron of a successful working business by telling the authentic true story set in one of the last remaining bastions of wild west capitalism: the county fair. And not just any county fair – the Erie County Fair – one of the largest and longest running expositions in the United States.
In these well-organized pages you’ll quickly discover more than a dozen rules exposing 54 vital lessons as told through a series of spell-binding real-life dramas of a young man who becomes a young businessman as he works in his grandparents’ pizza stand at the Erie County Fair. How useful are these lessons? Well, today, the businesses that young man has created have produced millions of dollars – all based on these easy-to-use rules and common-sense lessons!
But A Pizza The Action is no mere business book. It is an entrepreneur’s how-to manual wrapped in a “slice of life” memoir. As you read the decade of adventures from long ago, you’ll immerse yourself in the sounds of the dazzling midway, the smells of the sizzling foods, and the sights of the amazing performances. You’ll yearn once again to become a carney, but understand you don’t need to be a carney to enjoy the fruits of all that you learn from reading A Pizza The Action.
And when you get to the final lesson, you’ll know why it brought a tear to the eyes of so many.
Only then will you truly see the wealth that is yours to be had.
Available to buy from the following sites…
Kindle   Amazon Paperback   Barnes and Noble
“As he makes clear through his lively prose,… Chris utilizes a series of vignettes to provide, in a self-effacing style, very thoughtful examples of how hard work, coupled with solid personal, family, community, and business values, are the basis from which strong managers and entrepreneurs can succeed… Chris not only tells some wonderful stories, but for many of us, he brings back some long lost memories.”

Scenes from an Italian Entreprenuer
Even the simplest of life’s activities can build the most enduring memories. More important, in subtle ways they can offer lessons that stand a lifetime. When fully absorbed, these lessons can yield powerful results. In his book One Up On Wall Street, Fidelity’s superstar investor Peter Lynch explains how everyday investors can profit just by paying attention to the companies in their own backyard. Similarly, it is these same “backyard” (and sometime front yard) experiences of our youth that provide the lessons needed to reach the highest of heights in the business world. Much has been written of the proverbial lemonade stand and how it teaches budding entrepreneurs the meaning of business. This book takes place in the real-life world of a small family-owned and operated pizza stand in one of America’s most popular and prosperous annual fairs – the Erie County Fair – and follows through the events that led a young adult to learn invaluable lessons that, in the future, would help him become a successful entrepreneur.
Chris Carosa takes a series of mundane, everyday events not unlike what many experienced growing up – if they grew up working in their grandparents’ pizza stand at the Erie County Fair! What’s amazing is he takes these vignettes of his life as a Carney and connects the dots to come up with more than a dozen general rules – told through 54 specific lessons – he’s followed in all his entrepreneurial ventures. Mr. Carosa tells these stories through the same conversational and, at times, self-effacing style his readers have become familiar with.
Among the 54 Fascinating Lessons, You’ll Discover:
More books by the author

Christopher Carosa was born on the third floor of Mercy Hospital in Buffalo, New York on a hot summer morning in mid-July, 1960. Barely a Kindergartner, he and his younger brother produced a daily newspaper (for just one day, and mainly as an excuse to type on their mother’s vintage typewriter). He conducted his first public reading in first grade at the age of six, where he read a story he wrote about “Herbie the Helicopter” (sort of like “the little train that could” except with rotors instead of wheels).
Later, as a teenage rebel who detested all things literature and English class, he once joined with a small band of classmates in tenth grade who refused a class assignment to read a novel and write an analysis of it. The teacher gave each of the renegade students a stern choice: “either do the assignment or write your own novel.” While all his friends bowed to their instructor and did the assignment, Mr. Carosa held firm. He wrote his first novel “Armageddon” (a geo-political sci-fi epic set in the not-so-distant future). His teacher gave him an “A” and went so far as to suggest the budding scientist might have a dual career as a writer a la Isaac Asimov.
The young Carosa laughed at the suggestion, but remained a closet author, coming out rarely and when it was least expected. He agreed to serve as treasurer of his high school literary magazine Equinox, but only if the editors agreed to publish his sophomoric send-up of Star Trek. They reluctantly acceded to his demands. He went on to oversee a then record-breaking sale of the flimsy carbon-copy annual, mostly by offering to personally autograph every copy sold (“You never know,” he told unsuspecting buyers, “I might be famous some day.”)
Despite his best efforts, such as organizing a union of AP English Students (U.A.P.E.S.) and leading a “strike” where the entire class skipped one day, he passed his English classes. He found his antics fared no better in college, where his mocking essays failed to incite the professor, who instead enjoyed them for their “change of pace.”
Now a full-fledged adult, Carosa began writing in earnest the last few weeks of his college career. With hours of computer time left in his account and his senior thesis complete, he spent his remaining time using an archaic word processor to create entertaining tidbits for his friends.
And that was it.
The author within him went into hiding. He still wrote, but no one knew. He accumulated pages and pages, then floppy disks and floppy disks and then finally hard drives full of creative content. Some of it will never see the light of day (and probably shouldn’t). Some of it you see here and will continue to see.
Follow the author on the following sites…
Author Website   A Pizza The Action Website  Facebook
Twitter   Goodreads   Amazon author page 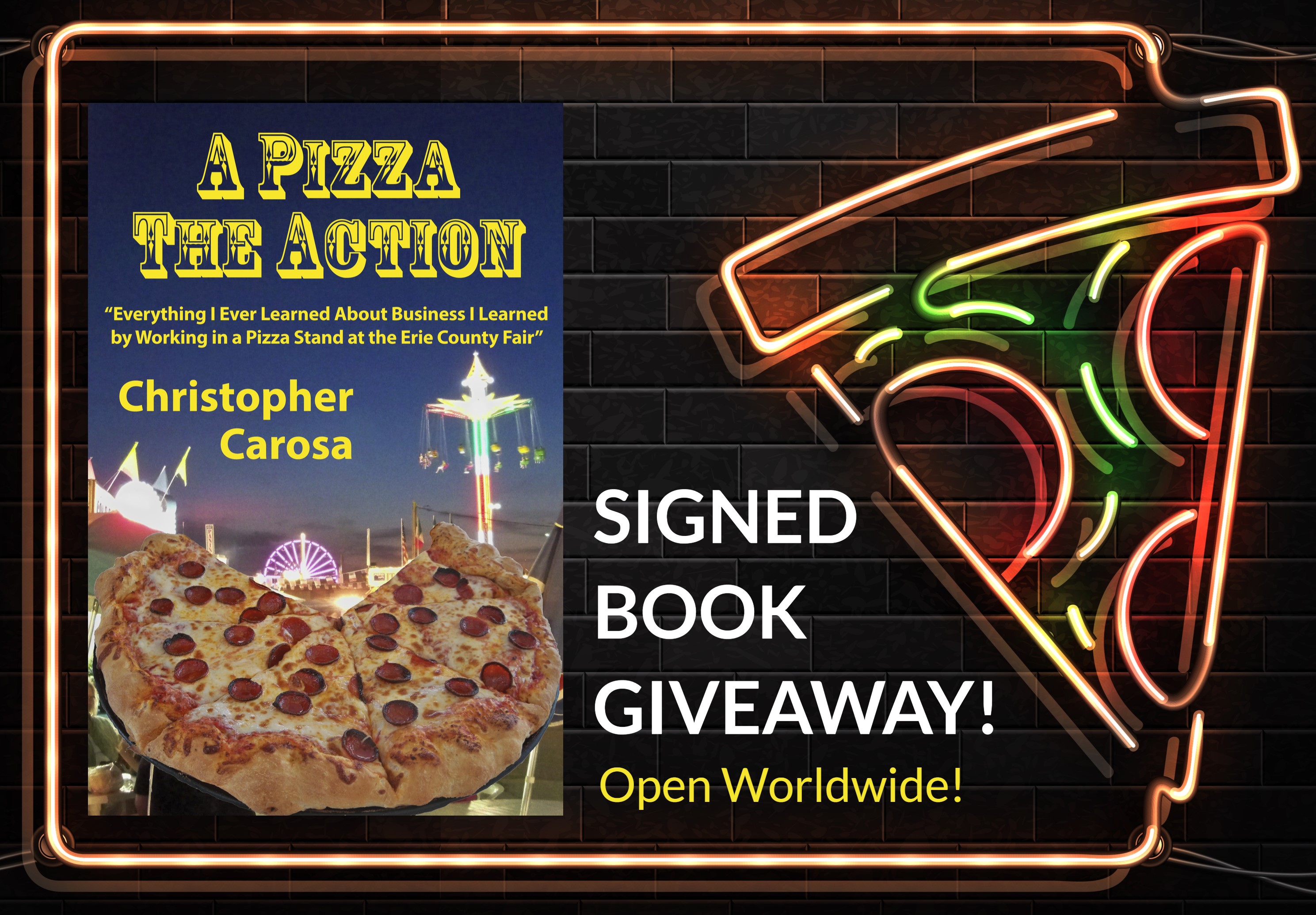