Available to buy from….
Amazon.com   Amazon.co.uk   Paperback
Readers are saying…
“Non-Stop Action! I couldn’t put this book down!”


“This book grips you right off the bat and makes you sweat bullets right to the last page!”


“Another great read by a top notch story teller that can definitely keep you in suspense and unable to stop reading.”
Above reviews from Amazon

A mysterious killer who calls himself The Artist is assassinating wealthy lawyers in San Francisco. When war veteran Jake Wolfe accidentally takes his picture during a murder, The Artist adds Jake to his kill list and he becomes a target in a deadly game of cat and mouse that only one of them can survive. How far would you go to protect your loved ones from a killer? Jake wants to leave his top secret, violent past life behind him. But the reluctant, flawed hero can’t ignore his duty and his personal moral compass.
This gripping thriller is full of suspense, plot twists and surprises. It features a cast of interesting characters, including several strong-willed women, two wise-cracking San Francisco Police Homicide Inspectors, one highly intelligent dog, and a philosophical killer who shares Jake’s admiration for Van Gogh paintings but still plans to kill him anyway. As Jake gets closer to unraveling a merciless conspiracy, his life gets turned upside down and the danger level increases, adding to the growing suspense. This entertaining page-turner starts out as a murder mystery and then shifts gears into a high-speed action thriller that takes you on a roller-coaster ride to the riveting ending. A good read for those who enjoy mysteries, suspense, action and adventure, vigilante justice, unique characters, witty dialogue and a little romance too. Now on sale in over a dozen countries around the world. Be the first among your friends to read it.
Fans of new Kindle Unlimited novels will be happy to know this book is one of the best financial thrillers in kindle unlimited books.
Available to buy from….
Amazon.com   Amazon.co.uk   Paperback

Mark Nolan began his writing career as a successful entrepreneur who created news stories for businesses that were featured in The Wall Street Journal, National Geographic, Parade, Reader’s Digest and The Associated Press. Nolan was born in San Francisco, grew up in the Bay Area of California, and has also lived in the Pacific Northwest and Hawaii. He has raised two great kids and one very smart retriever dog. Right now he’s busy writing the next book about Jake Wolfe (Book 3), but he also tries to make time every day to answer emails from readers.

The Jake Wolfe series is one worth picking up but if you don’t have time for two books – right now, that is, reading Vigilante Assassin will be worth it.
Mark Nolan writes page turners. I have a hard time putting this book down from page one. The action starts at page one and just builds throughout the book.
In Vigilante Assassin, Jake is thrust into a world of private security. He has been living on a friend’s boat and the head of a security company comes to see about fixing a lock on the boat. While there, he gets a call for a job. He asks Jake to come with him. The plot thickens from there.
You will have a hard time putting the book down without reading it in one sitting so plan on having a sunny day and nothing to do but read when you pick up Vigilante Assassin. I have volunteered to share my review and all the opinions are 100% my own.
NOW FOR THE AUTHOR’S GIVEAWAY 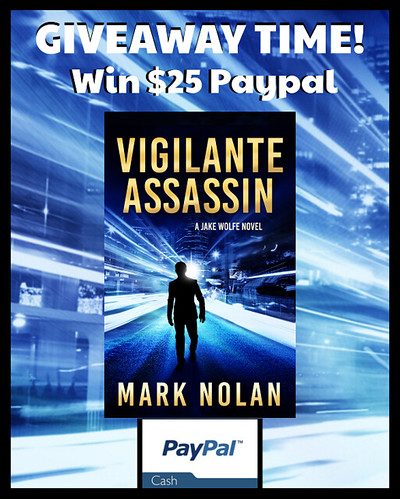