NEW RELEASE……..
Sweet with Heat: Seaside Summers features a group of fun, flirty, and emotional friends who gather each summer at their Cape Cod cottages. They’re sassy, flawed, and so easy to relate to, you’ll be begging to enter their circle of friends! All books can be read as stand-alone novels.Nights at Seaside by Addison Cole is the sweet edition of New York Times bestselling author Melissa Foster’s steamy romance novel Seaside Nights. The stories and characters remain the same and convey all of the passion you expect between two people in love, without any explicit scenes or harsh language. 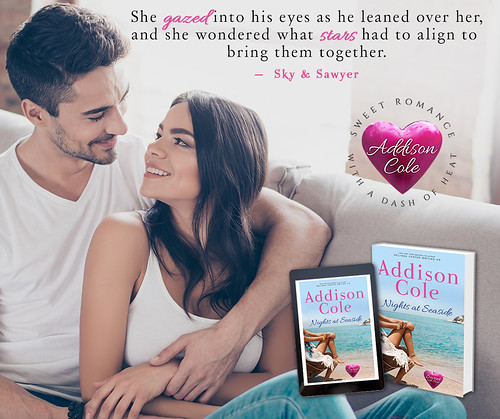 Jessica Ayers has lived a sheltered life with little more than cello lessons and practices taking up her day. Now a member of the Boston Symphony Orchestra, she escapes the prim and proper symphony to vacation in the Seaside community in Wellfleet, Massachusetts, to determine if she is living life to the fullest or missing it altogether.For the first time since developing the second largest search engine in the world, billionaire Jamie Reed is taking the summer off. He plans to work from the Cape and spend time with his elderly grandmother—and falling in love is not in his plans.From the moment Jamie and Jessica meet, the attraction is white-hot. Once-overly-focused Jamie can think of little else than sweet, smart, and alluring Jessica, and Jessica discovers a side of herself she never knew existed. But when Jamie’s business encounters trouble and his attorney and best friend intervenes, he proves that the brown-haired beauty is too distracting for Jamie. To make matters worse, it appears that Jessica might not be who she says she is, turning Jamie’s life—and his heart—upside down. In a world where personal information is always one click away, Jamie must decide if he should trust his heart or watch the woman he loves walk away.

Secrets at Seaside is the sweet edition of the steamy romance novel Seaside Secrets by New York Times bestselling author Melissa Foster.
Available to buy from …

Melissa Foster becoming Addison Cole and writing sweet books with just a touch of heat might have been the best business decision of the decade. I love Melissa’s writing and am even more in love with Addison’s. Not all my friends enjoy a book that is a bit more explicit so Addison’s adaptations are just what I need to recommend to these people.

While this is book six in a series – at least if I count correctly, it can be read as a standalone. I would, though, recommend you read them all. Picking up a Seaside book is like going on summer break with friends. I feel like all of these women, and men, are people I would hang out with. I look forward to each new book because I want to get back to my friends and see what they have been up to.

I’ve been waiting for Sky’s story. She was the outsider that grew up there but had not been a part of the group since these women had been coming back to Seaside. I wanted to see who she would end up with and Sawyer is the perfect choice.

I highly suggest you pick up a copy of Nights at Seaside. I received this book through Beck Valley Books Book Tours, I have volunteered to share my review and all the opinions are 100% my own.

One thought on “Nights at Seaside – A Book Review”