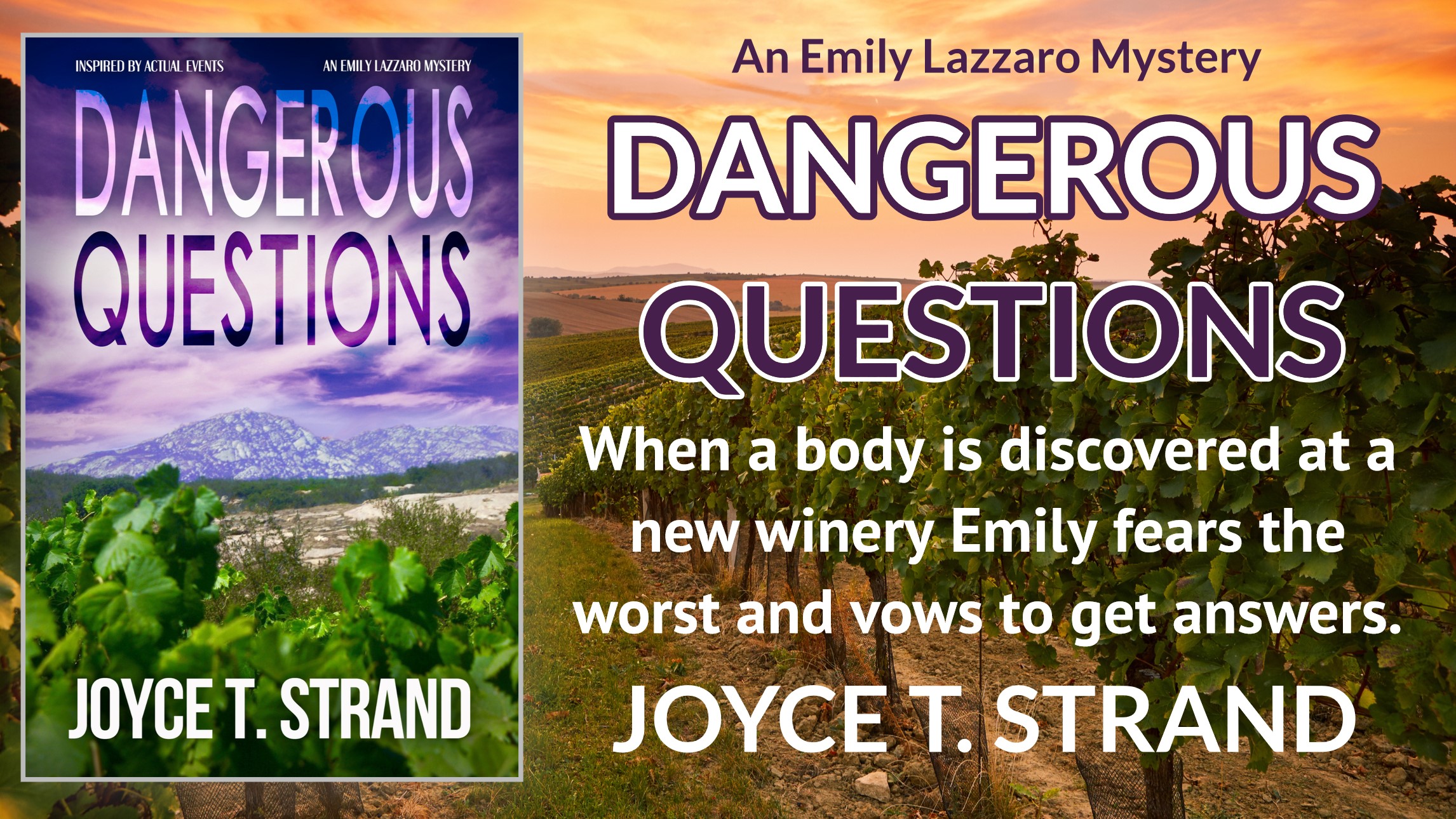 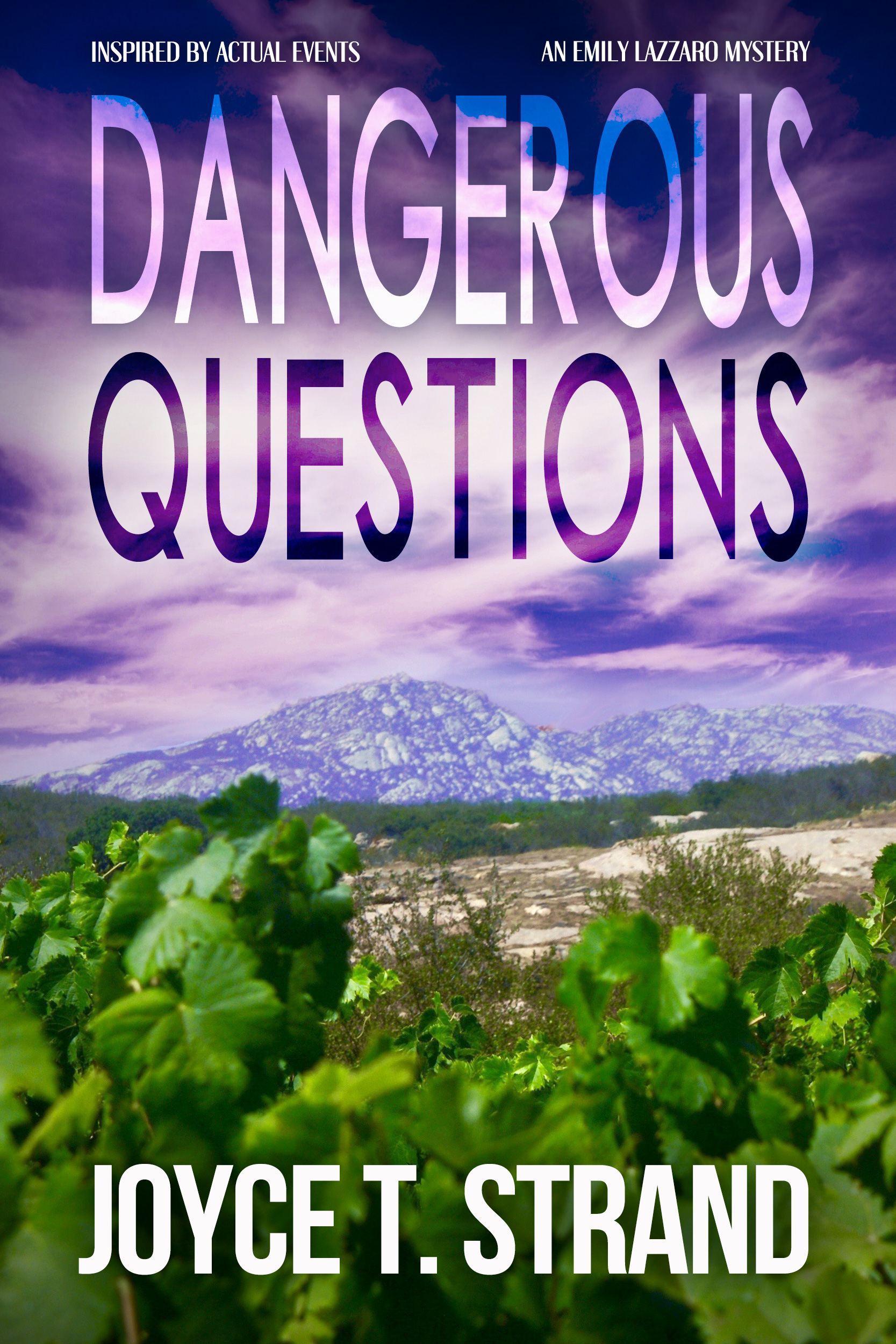 Murder or deception? Despite repeated warnings to back off, Emily Lazzaro asks some dangerous questions about the disappearance of her employee from the Mane Stay B&B that she manages. When a body is discovered at a new winery opened by a friend, she fears the worst. Her single-mindedness turns into a compulsion and threatens her relationship with her potential husband. Nonetheless, she vows to get answers.

Available to buy from……
Amazon   Barnes and Noble    Paperback
About Emily Lazzaro
Emily Lazzaro is the daughter of Wayne Lazzaro, the winemaker for the Hilltop Sunset winery in the previously published three Brynn Bancroft mysteries. She moved with her fiancé to Ramona, Calif., a rural community near San Diego, following graduation from college with a degree in hospitality. Her fiancé was eager to purchase a vineyard and develop a winery in the up and coming Ramona wine region, which suited Emily’s goals.
However, after moving to Ramona, it becomes apparent to Emily that she is not a good match for her fiancé. She discovers that he does not respect her opinions and insists on making decisions without her input. So she breaks off the engagement.
She decides to remain in Ramona despite her fiancé living there with his new vineyard. She appreciates the unique rocky terrain and proximity to the ocean and San Diego, along with the mixture of fine wineries, artists, and equestrian activities.  She makes her living doing people’s taxes, and when Dangerous Changes opens, we discover she is looking to make a career change. 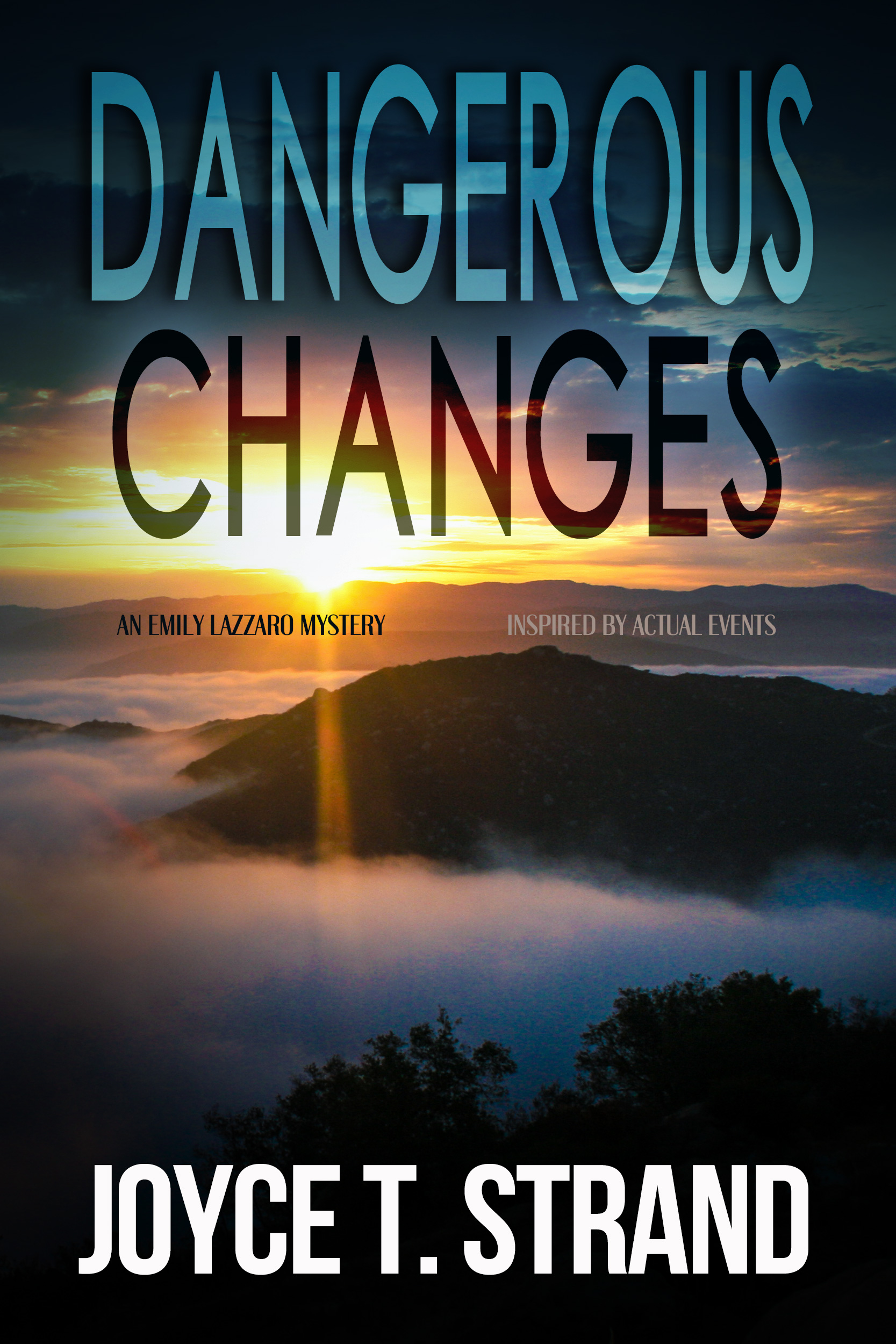 A series of events rattle Emily Lazzaro: a near-death encounter with a pickup on a narrow mountain road, the murder of a would-be client, and an ex-fiancé who won’t let go. Can she survive a police investigation, pressure from her ex’s company, and the suspicions of a possible new love-interest—so that she can make the changes to create a meaningful new life in a special town in southern California?
Available to buy from……
Amazon   Barnes and Noble    Paperback
Dangerous Delays (An Emily Lazzaro Mystery) 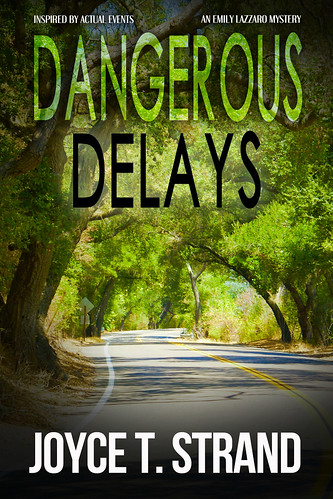 Finding a corpse buried with Native American artifacts wasn’t the first delay of the renovation Emily faced. But she was not prepared for what followed. A murder investigation, excavation to uncover more artifacts, and drug dealers looking for missing product further delay the mansion’s restoration into an iconic B&B. While facing these setbacks, Emily is also realizing her growing attraction to a local chef, a man who believes a relationship isn’t possible due to his commitment to care for his brain-injured brother.
Available to buy from……
Amazon   Barnes and Noble    Paperback 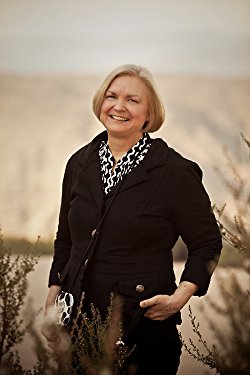 Joyce T. Strand is the author of who-done-it contemporary and historical mysteries set in San Francisco, the Napa-Sonoma wine regions of California, and in Ventura and Ramona, California.Her contemporary novels, written as stand-alone trilogies, feature protagonists Jillian Hillcrest, a publicist in Silicon Valley; Brynn Bancroft, a financial guru in transition to winemaker from corporate executive, who was Jillian’s boss in the Jillian Hillcrest mysteries trilogy; and Emily Lazzaro, the daughter of the winemaker in the Brynn Bancroft trilogy, who has moved to a small California town and become the manager of a bed and breakfast.

Her first historical mystery, The Judge’s Story, tells the story of a Superior Court Judge with a passion for social justice as well as the law who strives to discover the truth behind the mystery of a robbery-murder in a small California town in 1939. Her second historical mystery, The Reporter’s Story, features a young female reporter in 1912 San Francisco who confronts murder, intrigue, and smuggling on her way to becoming a world-recognized reporter.

None of these sleuths goes looking for crimes to solve, but they are all drawn in when they confront murder, burglaries, and fraud.

All of her novels are inspired by actual events and/or real people, although they are definitely fictionalized.

Much like her protagonist Jillian Hillcrest, Strand headed corporate communications at several biotech and high-tech companies in California’s Silicon Valley for more than 25 years. Unlike Jillian, however, she did not encounter murder in her career. She focused on writing by-lined articles, press releases, white papers, and brochures to publicize her companies and their products and welcomed the opportunity to turn to fiction.

Strand lives with her collection of cow statuary in Southern California, and enjoys exploring and writing about the growing wine region in the Ramona Valley near San Diego.

She received her Ph.D. from the George Washington University, Washington, D.C. and her B.A. from Dickinson College, Carlisle, PA

Emily Lazarro runs a bed and breakfast in Ramona, California. And Ramona seems to have turned into a hot bed of all kinds of activity as Emily is always getting involved in some mystery or other.
Dangerous Questions is not different. Emily has hired some help at the B&B. She went through a recommended temp agency and found Kendal. Kendal and Emily have become great friends. Then, Kendal disappears. Of course, Emily wants to be a good friend and wants to be sure the local sheriff’s office is doing all they can to find Kendal.
In the meantime, Emily’s own life changes drastically when her chef and close friend Jackson asks her a very important question. Will Emily ruin her future trying to find what happened to Kendal? Will Jackson decide this is just a part of Emily and he can adapt to it?
I loved finding the answers to my own not-so-dangerous questions. Pick up a copy of Dangerous Questions and find your own answers. I have volunteered to share my review and all the opinions are 100% my own.
NOW FOR THE AUTHOR’S GIVEAWAY !! 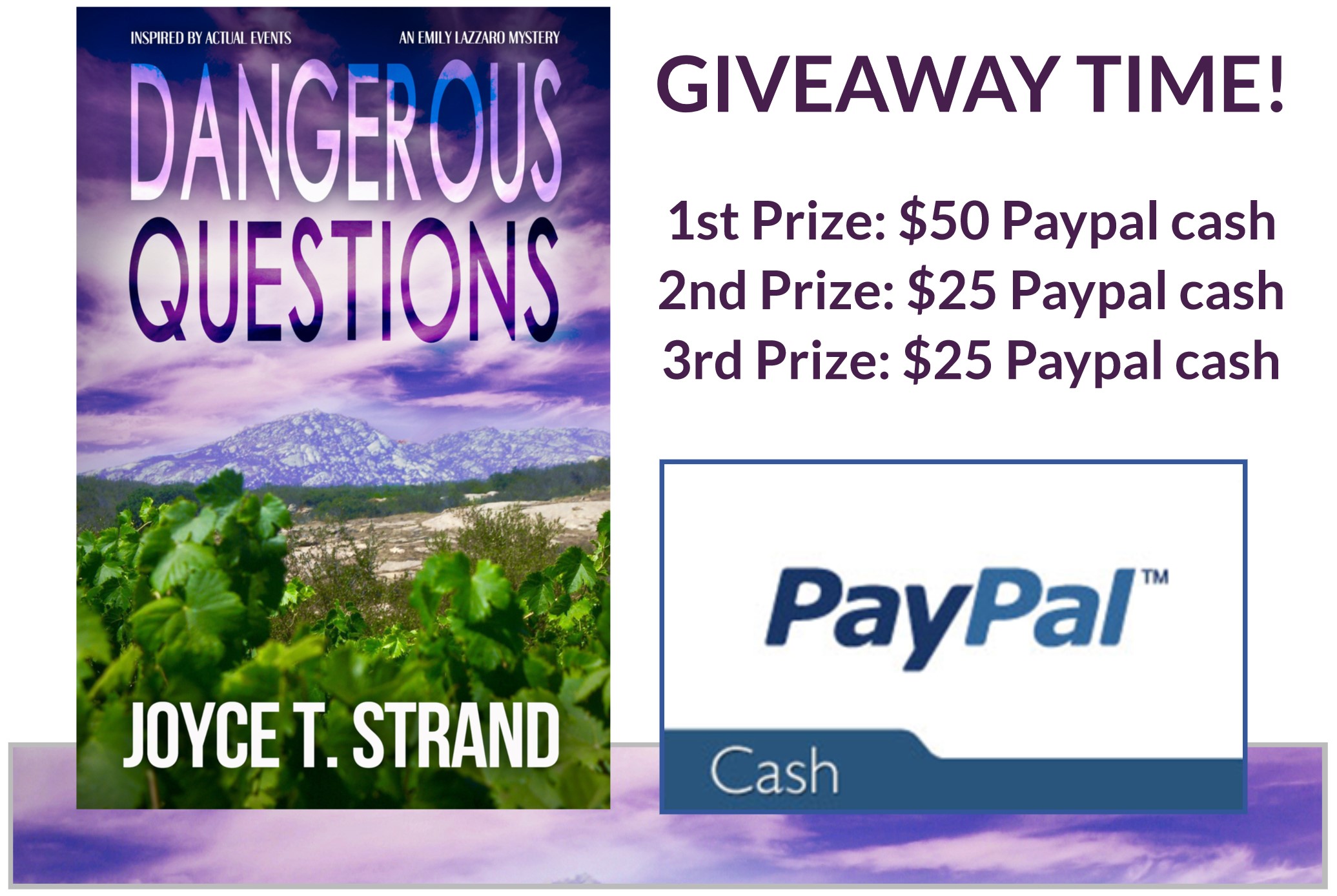 One thought on “Dangerous Questions – A Book Review”