The race itself is recapped in this post and the next as I am wordy. All race photos were taken by my kids (either my daughter or my son). Most were taken in Bloomfield , between miles 22 and 23.

Being in the last corral – or even in the corral in front of me, we all were around the corner from the start line. We couldn’t hear the gun but knew the start was near when the volunteers started moving the corral gates. A loud round of applause went up when the corral gates were moved. Approximately 20 minutes later, we all crossed the start line. This is a new record for me. I have never taken that long to reach a start line. My previous longest was at the 2010 Boilermaker 15K when it took me 8 minutes to cross the start line. I feared the crowded field would make it impossible to see potholes or manhole covers. I didn’t want to twist something right at the start.

Music started almost immediately. In the first two miles bands went from rock to Celtic, from groups to duos to individuals. Amazing music and never did the sounds overlap. 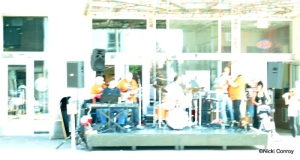 Cheer groups started in the Strip District. This area should have been where I saw my kids first. I had traveled with my 17 year old son and 25 year old daughter; my 23 year old daughter and her girlfriend live in Pittsburgh. We had just been to the Strip on Saturday to get vegetables for Cinco de Mayo. I love this area!!! I could shop at some of these places all the time. I have run through the Strip District when I was in Pittsburgh in September for my daughter’s college graduation. I tried to stay in the middle of a still crowded field as I didn’t want to miss the kids if they were on a side of the street I was not. I didn’t think I heard of saw them but would not find out I was right until the end when Suz told me they all went back to sleep.

After the Strip District, we crossed the first of five bridges – the 16th Street bridge. My plan was to take a Clif Shot every four and a half miles. Near the end of this bridge, I downed my first one. The first five miles came to an end shortly after and I was a little faster than I wanted to be. I had hoped to run this distance in an hour. I looked at my Garmin and it said 56:17. While that seems close, those almost four minutes would haunt me in the end. I also noticed that while the pace group which was in sight – the field was still crowded – was not stopping to walk a bit after each mile. I am not sure why not but that was okay also. Walking was done through the fluid stations. I was drinking a sip or two at each station and used my own water after my Clif Shot. I had not planned to walk the first five miles but the plan was to start for 20 seconds at the end of each mile and through fluid stops, starting after five miles.

Miles 6-10 sort of blur together for me. I remember I would get near Pacer Marie and then a fluid stop would come up and I would lose contact with her. I thought I was way behind her as we went past the Liberty Bridge (we had already crossed four of the five bridges in the race – three in the first five miles and one, West End and over the Ohio River, just before the end of mile seven) but I just could not see her. We are about the same height but seeing the hat and balloons made me realize I was still in touch with the group.

Around 5.25 (a guess as I may have looked at my Garmin but it is all mush in my brain now), the first group of kids waiting for high fives came along. Being a mother, I went out of my way to get to those kids so anyone with a hand out got a high five. I would continue this process with few exceptions along the entire route.

About mile 8, I had to take off my right shoe due to my toes bothering me. This has happened almost every run during this training – both before and after I got my Pure Connects so I do not think it is shoe-related – and is relieved by a quick massage of the toe area. It would plague me again later in the race but that quick massage did the trick here.

My Garmin seemed to be about two-tenths of a mile ahead of the mile markers on the course. Just after mile 10 went past on my Garmin, I had to stop for a bathroom break. Yes, there was a line at the bank of six porta-potties but not nearly the line that there had been at earlier ones. I was fourth or fifth in a line which grew while I was in it. One poor woman came up the line asking if she could cut the line as she had just gotten her period. I didn’t care one way or the other. This is where I truly lost Pacer Marie. I never saw her again until I saw her at the finish line in passing.

My time through mile 10 was 1:57 so I was ahead of my plan of hitting here at two hours. I should have realized then that I had probably started too fast. I definitely slowed down as mile 11 included the bathroom stop and it was about three minutes slower than the previously slowest mile of the race.
I ran the next couple of miles with whoever was going the pace I needed to run. None were outstanding. The 5:30 pace group came up around the halfway mark. I spoke to Marcela and jumped in with them. This was near the Pitt campus. Being a West Virginia Mountaineer, my memories of Pitt are all football games and frat parties. The Backyard Brawls while I was in Morgantown were phenomenal! This particular day I was just happy for tall buildings as that meant shade. Living outside “town,” I forget that it is always warmer in town and cities – real cities like Pittsburgh – have little or no shade. Tall buildings provided shade in more than one area of the course.

Half the race has gone past. I am about 15 minutes off my half PR from April 1 (on a half course that is at least as hilly as this marathon course). Worse is that the time on the clock at the half point is set to gun time. Gun time is 20 minutes more than my Garmin is telling me. I know that part of the reason I was so slow at the end of Wineglass back in October is that I ran the first half so quickly. This first half is not quicker than my half PR – which is what I did at Wineglass – so I am still hoping to finish with a PR in this race but there are 13.1 miles left to go.